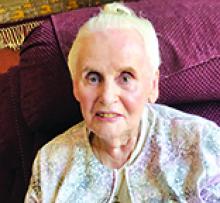 Elisabeth Hellmuth died peacefully at St. Boniface Hospital on April 3, 2021.
She was predeceased by her brother Hans-Detlef Horn (1989), husband Dr. Fritz Hellmuth (2006) and son-in-law Frank Curtis (2018). She is survived by her three daughters, Ulrike, Tina (Dave Najduch), Katherine; grandchildren, Michelle and James Najduch and Elizabeth Mantaci; her brother Peter Horn, and nephews and nieces in Germany and Denmark.
Elisabeth (Mutti) was born in Kiel, Germany where she had a carefree happy childhood until the Second World War broke out when she was 14. She would share her tales of running to the air raid shelters and having little to eat. At 18 she became a lab technician, a job that abruptly ended when a bomb destroyed her workplace. She had many wonderful friends and adventures during the next decade of her working life and met and married our father Fritz in 1955. A year later they immigrated to America and Canada settling in Winnipeg in 1958. She lived in their St. Vital home where she raised her family from 1961 until her passing.
Mutti was a consummate caregiver and stayed home to look after us, our father, the grandchildren and our grandmother until she too passed at age 97. She was present in all our lives and also stayed in contact with everyone in "the old country".
She was a talented painter, weaver, piano player and proud of her home where everything was homemade by herself and our father. They built the furniture, she wove the fabric for the upholstery, curtains and even some of our clothes. She was an amazing seamstress, a passion that some of us inherited. During her pottery phase she created the lamps and dishes. Everyone enjoyed her traditional German baking which we really need to carry on.
At age 50 our parents built their beloved Broken A Frame cottage on Lac du Bonnet. This was their haven where she could garden, listen to and play classical music, relax and spend time with her children and grandchildren. We all have great memories of pontoon boat rides, playing badminton and evenings of table games. She beat us all in triominos, adding the scores in her head while we pulled out the calculators! She was razor sharp and managed her own life until the end. Mutti drove her standard transmission red sports car until age 88 and later her red Ferrari, aka scooter for miles around the cottage.
She was an avid fan of classical music, theatre and the arts attending all Winnipeg offered until well into her 90s. She played tennis in her youth and loved her televised tennis matches where she cheered on her favourites. She became an "actress" at age 96 after being interviewed for a documentary based on the top selling Danish book written about her brother's time in the Second World War. She always planned for the future, stayed on top of global current events and left a lasting impression on anyone who had the opportunity to meet her. She was able to charm them by her keen wit and her insightful comments and questions. She never shied away from the truth.
Mutti travelled extensively around the world with us all and was always a cheerful and willing travel companion with boundless interest and energy. She was our best friend and our confidant. She gave us endless support and encouragement and will always be our inspiration for loving life, striving to fulfill our potential and being there for our loved ones.
The family would like to thank the compassionate staff at St. Boniface Hospital 4E.
Elisabeth has been cremated and a celebration of her life will take place in the summer, as Covid guidelines permit.
If desired, donations in her name can be made to the Canadian Cancer Society.