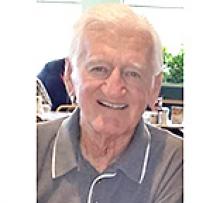 Surrounded by his children, Dad earned his wings and joined our Mom!
Dad was predeceased by his beloved wife of 50 years, Helen; parents, Charles and Ada Butt; father and mother-in-law Edward and Alvina Gretschman; brothers-in-law, Ed Litke, Walter Gretschman, Kerry Snead; and his nephew David Litke.
Left to cherish his memory are his children: Karen (Rob) Dunbar, Bryan Butt, Carol Beaudoin (Ryan), his grandchildren: Brian Butt (Melanie), Cassandra Butt along with their mom Aggie, Josanne and Danyk Beaudoin, great-granddaughter Olivia Butt, as well as numerous family and friends.
Dad was a St. Vital Boy and where he learned the love of sports that stayed with him for life along with many lifelong friendships. Dad spent many years coaching Bryan in hockey and baseball and was proud that he played hockey till he was 75. Growing up we spent many Sundays at the rink watching Dad play and summers to the lake where most of the hockey team continued their Shennanigans, it really was a second family.
Dad was inducted into the Manitoba Baseball Hall of Fame and the Mustangs Hall of Fame where he played for the Mustangs in his youth and he coached a Rag Tag group of boys. In 1965 to the Championship that year, and 40 plus year's later one of those boys wrote for the Free Press and did a documentary along with an article in the paper about this team.
Dad spent his career as a Real Estate Agent with the last 25 years being with Qualico. Once retired he enjoyed many winters in Texas golfing for a month.

We know you are at Peace now Dad,
playing hockey, golfing and probably
driving Mom crazy already.
"Love you, until we meet again".

A private family interment will be held. When restrictions have lifted a celebration of Don's life will be held.
In lieu of flowers, donations may be made to Never Alone Foundation Inc., 1700 Church Avenue, Winnipeg, MB R2X 3A2.