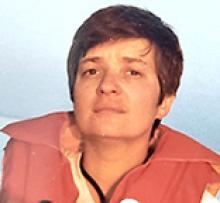 It is with deep regret that we announce the sudden passing of Carol Anne Billett on April 4, 2021, Easter Sunday at her home. She was 71 years old.
Lovingly remembered by Wendy Johnson and family, her sister-in-law Donna Billett and niece Olivia; cousins, Debbie and Jeff Le Bane, Rod, Steven, and Nancy Ward, and many cousins in the Maritimes and across Canada. She will be missed by Caitlin and Kristen Brown and families, the Johnson family, and many old friends including Jaye Miles and Shelley Levit, Joan Campbell and Marion Blank, Judy Plotkin and Ruth Laveman, Jennifer MacDougall and Diane Bergman, Dale Mackenzie and Barrie Truitt, Val Innes, Bobbi DePontier and Kathy Love, and many others. She was predeceased by her parents, Albert and Joanne Billett, and her brother Brent.
Carol was born in Winnipeg on March 12, 1950 during the Winnipeg flood when her Mom brought her home from the hospital in a canoe. She moved several times as her father was with the RCMP and they were posted in Sprague, Thompson, Dauphin and Brandon. She graduated from University of Brandon with BA (mathematics) and BSW (University of Manitoba) which led her to a career helping others in numerous ways. Carol was proud of her work with Mincom, a program which piloted giving basic income to families in poverty. Family Dynamics (formerly Family Centre) was her home away from home for nearly 40 years and her clients and colleagues were like family to her. She loved her work there and had a hard time retiring a year ago.
Carol was a passionate crusader for environmental causes, gay rights, and women's equality. In 1984, Carol, Joan Campbell and Bev Banks started Ms. Purdy's, one of the longest running gay and women's clubs in Canada. As a passionate environmentalist, she was involved in environmental issues in numerous ways and donated to many conservation groups. She was recognized for her work as a founding member of the Save Our Seine Project. Her early exposure to canoeing led to her later engagement with nature by paddling across many Canadian lakes. As a strong feminist and former chair of the board of Women's Health Clinic, she advocated for the rights of women to inclusive and comprehensive health care.
Carol loved her cabin at Buffalo Point which she built with friends in the early 80s. It was more than a cottage to her. She loved cooking and learned the skills at a young age from her Italian grandfather, Chef Guissepe Roncato. As well, anyone who knew Carol could attest to her love of dogs, and she greeted each and every one on her walks.
Wojcik's Funeral Chapel is in care of arrangements. Cremation has taken place and an online service is planned for a later date. Carol's ashes will be scattered at Buffalo Point in August.
Thanks to family and friends for all the love and support. Donations may be made in Carol's memory to Winnipeg Humane Society (donations@winnipeghumanesociety.ca).

"I see my light come shining
From the west out to the east
Any day now, any day now
I shall be released"
Song by Nina Simone (Written by Bob Dylan)