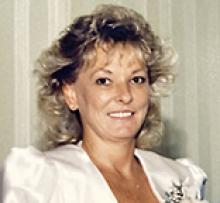 It is not how long the flower blooms, but how beautifully.
It is with great sadness that we announce the passing of our beautiful Mother, Grandmother, Great Grandmother, Aunt and friend. She passed peacefully on April 1, 2021 with family by her side.
Lucille was the youngest of three children, born to George (Ewan) and Tennie (Tekla) Eschun on March 31, 1937 in Dryden, Ontario.
Upon moving to Winnipeg, Lucille attended St. Alphonsus Roman Catholic School and Miles Macdonell High School. After school, she worked at "The Met" Metropolitan Theatre. She spoke fondly of this experience working with the popcorn machine and serving patrons from the candy bar. I can only imagine how fun that would be in such a "Grand" building in the 1950s.
In 1955 she married Leonard (Len) Rebeck, and they were blessed with 64 years of love and laughter until his passing in May, 2020. Lucille was heartbroken with the loss of Lenny's constant companionship. They had a child-like playfulness between them and it was enjoyable to watch them chase and tease each other. Being together since they were 18 and 20 years old and still holding hands when Lucille was first hospitalized after suffering a stroke in 2015. Staff mentioned how cute they were together, sitting side by side. They loved attending work and hockey parties and were often to be the last ones on the dance floor. Pretty Woman by Roy Orbison was one of her favourite songs to dance her feet off to!
Other interests included travelling with friends and family to Las Vegas, Mexico and Hawaii. In the later years she enjoyed playing the VLT's and playing "Larry" as she called it. She was actually a very lucky person and had won a brand new car in 1978!
Lucille made a home for her family in the Elmwood/East Kildonan area; living on Kimberly, Martin and the last fifty plus years on Johnson Avenue West. She treasured the friendships she made with her neighbours.
She was a strong, loving, inspirational woman whose mothering skills extended to the next generation and beyond. Lucille raised her four girls almost as a single parent as Len worked out of town all summer and in the winter he played, watched and coached hockey. She did it all and didn't drive. Many long bus rides for groceries, cooking, cleaning and parenting four hormonal moody daughters. Yes! She deserved a medal!
Sadly her beloved daughter Cheryl left us in 2003 after a year long battle with Cancer. Cheryl took part of Mom's heart with her and Lucille's life was forever changed. She is survived by three daughters: Susan, Sandi and Liana. Grandchildren, Ryan, Jessica, Jestine, Jordan, Chase, Jenna, Julien and Sarah, plus five great-grandchildren.
Lucille was immensely proud of her family and leaves nothing behind but beautiful memories.
She was a devoted wife and mother. Len was truly treated like a king and Lucille's home was her castle. She loved cooking and then watching with pride as her family enjoyed her amazing feasts. Her passion was in gardening and keeping her house and yard immaculate. Once the work was done, she would lay in the sun and enjoy a Club Beer.
When canning season began, she would make pickles, relish, salsa, you name it. She canned or froze it! It was all superb and shared by many.
She loved her flower beds and apple trees. She would give bags of delicious apples away to everyone she knew. She shared with me once that she gave so generously, her apples, pickles, perogies, baked goods because she grew up with parents that came to Canada from "the Old Country", Ukraine and they lived through the Depression. She told me of the year she received a banana for Christmas. She made sure that everyone that came to the house left with something in their belly or a bag to go. Everyone that is reading this, that met Lucille was touched by her kindness and generosity in some small way.
Lucille loved her pets as if they were her children. Losing Rocky and Mikey in the last few years was devastating for her and Len. Since August she formed a special bond with Storm (Liana's dog) and he'd sleep by her side and follow her around because she always had treats and a hug for him. He brought her so much joy in her last few weeks.
She loved all animals especially the frequent visitors to her yard. The birds, squirrels and bunnies enjoyed being fed by her daily. She liked when she could watch them from her kitchen window as they frolicked in the apple trees.
Lucille gave her grandson Julien the Robert Munsch book, "Love You Forever" when he was first born. He loved that book, and Gramma and him would share it often. Their relationship was as beautiful as the one in the book because he truly cared for his gramma up to her last days, and along with his girlfriend Sophie, Mom, Liana and Rob. They were able to make her feel loved and cared for now and forever. Every time Julien would see his Gramma, he'd say, "You look beautiful today Gramma" and a huge hug. She always smiled and she was always beautiful to us , inside and out!

From Liana
Your Hug Meant The World
Nobody else held me so tight
Or made me feel so right
No one's eyes shined so bright with love
As my Mom, who is now high above
- Tamsen Butler -

Special thanks for all the support and advice to nephew Dr. Gregg Eschun.
For always being there for Liana during some tough caregiving decisions: Aunt Fran Rebeck, Robert Bilodeau, Sophie Halwachs and Ruth-Anne Craig.
Thank you to nephew Barry Rebeck and Rick Kotaska (Interlake Cremation & Memorial Services) for taking care of Mom and all the arrangements with such class and dignity.

Condolences may be left on Lucille's memorial page at www.interlakecremation.ca