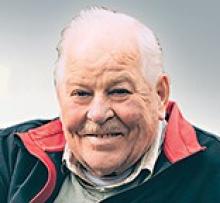 Joseph (Joe) Ephriam Thomas Fleming, beloved husband of Carole Fleming (nee Wolanik), of Calgary, AB, passed away on Monday, April 19, 2021, at the age of 91 years.
Joe was born in Carman, Manitoba, on October 1, 1929. As a young boy he moved to Winnipeg where he lived with his mother Anne Comberbach, and his stepfather Garnet Comberbach.
In his teens he joined the Air Cadets and the Royal Canadian Navy Reserve in Winnipeg where he was a member for 12 years. When he was 16, in 1946, he took part in active sea duty on the HMS Antigonish travelling to Hawaii as part of a Canadian naval operation.
Joe attended Gordon Bell High School in Winnipeg. It was there that he met the love of his life, Carole. They started dating in high school, were members of the cast of Gilbert and Sullivan's Ruddigore, attended their school graduation together and never looked back. Joe and Carole married on June 29, 1951. This June would have been their 70th wedding anniversary.
Joe began his apprenticeship in the printing business with the Southam News Company in 1949 at the Winnipeg Tribune where he subsequently became production manager until the paper folded in 1980. He, Carole and the family transferred with Southam to Calgary where he took on the role of Assistant Production Manager of the Calgary Herald. He later was promoted to Production Manager and retired in 1992 after 43 and one-half years with Southam. Joe always made the people on his team at the Tribune and the Herald a priority. He took the time to talk to people, shake their hand and get to know them.
Joe and Carole began raising their four boys, first in St. James in Winnipeg and later moving to an acreage in East St. Paul, Manitoba. As the boys grew, Joe was an attentive hockey dad and scout leader keeping all the boys engaged in these activities for many years. During this time Joe and Carole leased a lake-front lot on Jessica Lake in the Whiteshell Provincial Park. With his handyman skills Joe built the cottage using reclaimed lumber hauled in from Winnipeg. The entire cottage was built without electricity using hand tools and lots of elbow grease. Joe, Carole, and the boys would enjoy Jessica Lake every summer from the last day of school until Labour Day. It became their favourite place to spend vacations. Joe wasn't just a builder of things; he was a builder of friendships, love and caring. Over his 60 years of going to Jessica the cottage became a place for family members and friends to connect through joy and laughter, creating memories that will be cherished forever.
Joe had a passion for golf which he passed on to his boys and grandkids (and hopefully great-grandkids one day). The Whiteshell was a perfect place to enjoy the game with wonderful courses at Falcon Lake and Pinawa within an hour's ride. Everyone knew Joe as a "collector" and a "recycler-for-money" so it was no surprise when asked how his game went, he would reply with, "Great! I found a dozen golf balls and two dozen beer cans on the course."
Joe was a member of the Royal Canadian Legion, Branch 184 where he enjoyed his weekly outings, engaging in a friendly game of pool and lunch with his former business associates Al Rudd, Ken Brown, and Ken Turner, known as the Four Amigos. The Amigos were not into heavy betting during their pool contests and on those occasions when Joe was the victor, he proudly boasted of his eighty-five-cent booty.
He will be forever loved and remembered by his wife Carole; three sons and daughter-in-law, Mark and Kim, Grant, and Randy; and by his grandchildren: Amanda (John Hobbs, great-grandchildren, Blakely, Oaklee, and Mackenna); Mark Jr. (Ashley, and her children, Charlee and Tyler); Alex (Kerstyn, great-granddaughters, Ember and Emilia); Joey (Devyn, great-granddaughter Ferrah); and Jordan (Liv). He is also survived by his half-brothers, Delbert Comberbach (Josie), Wayne Comberbach (Maureen), and Medric Comberbach (Cathy); and by his half-sisters, Lacona Cunningham (Ted), Maroah Borgia, and Lorise Clark (Randy); as well as half-sister Kathy Aulk; and half-brothers, George Fleming (Jan) and Bill Fleming (Virginia). Joe kept his siblings close to his heart, and despite living far apart he created close relationships with each of them. Carole's sister Helen, and her children, Raymond, Joyce, Brian, and Leslie were also very close to "Uncle Joe" spending many a warm summer day down at the cottage with the family.
Joe was predeceased by his young son Kevin (October 23, 2018), father George, stepmother Alice, his sister Beatrice; half-brothers, David (Pat) and Paul; his stepfather Garnet and his mother Anne Comberbach who lived to be 101 and one-half years old.
A private funeral service will be held on Saturday, April 24, 2021 at 2:30 p.m.
Family and friends are invited to join Mr. Fleming's service streamed live at https://mhfh.com/tribute/details/32986/Joseph-Joe-FLEMING/obituary.html#tribute-start on the day of the service. For those who are unable to view live, a recording of the service will be posted. Condolences, memories, and photos can also be shared and viewed here.
If friends so desire, memorial tributes may be made directly to the Alberta Cancer Foundation, Provincial Office, Sun Life Place, 710, 10123 - 99th Street, Edmonton, AB T5J 3H1 Telephone: 1(866) 412-4222, or to a charity of the donor's choice.
In living memory of Joseph "JET" Fleming, a tree will be planted in the Ann and Sandy Cross Conservation Area by McINNIS and HOLLOWAY FUNERAL HOMES, Crowfoot, 82 CROWFOOT CIRCLE NW, CALGARY, AB T3G 2T3, Telephone: 403-241-0044.