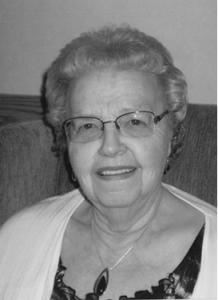 SIMPSON: Ruby Edith, age 83 years, beloved wife of Charles Melvin "Charlie" Simpson, passed away Monday, April 12, 2021 at the Brandon Regional Health Centre following a brief illness. Ruby (nee Booth) was born in Bassano, Alberta on February 10, 1938 to parents Ralph and Florence. From grades one through eight she attended Bethany School and graduated from Tilley High School. Following Business College in Calgary, she married Harvey Bartz in 1957 and moved to Regina, Saskatchewan. Three children were born of this union: Robert Paul in 1958, Donald James in 1959 and Tracey Lynn in 1961. The marriage dissolved in 1962 and Ruby moved, with the children, to Brookdale, Manitoba in 1967. Her brother Bill warned her, upon the move, that she could not live there because she would freeze to death. The cold climate proved worthwhile when Ruby met Charlie, and they were married in 1973. A farm girl at heart, Ruby was fun loving, an avid gardener, and a great cook. Together she and Charlie farmed grain and cattle in the Brookdale area, working closely with nephew Donald Simpson. In 1978, the Tag-a-long Red Angus herd was started and grew to over 300. They were members of the Manitoba Angus Association for many years and were presented with Honorary President's pins by the Canadian Angus Association in Toronto. The herd was dispersed in 2005, but they remained on the farm for another year following their retirement. Charlie and Ruby moved to Neepawa from Brookdale, where they lived for three years. They then moved to Victoria Landing in Brandon where they enjoyed the company of many friends and staff members. Ruby is survived by her husband Charlie and children Bob (Heather) Bartz, Don (Cathy) Bartz and Tracey (Doug) Anderson. Ruby will be lovingly remembered by her grandchildren Glenn (Jessica), Charlene (Mark), Caitlin (Kris); Scott (Cara), Jamie (Jenna), Andrew (Amber); Patricia (Greg), Trent (Jessica), and her great grandchildren Kristyn, Andrew, Ivy; Charlotte, Madeline, Brooklyn; Caden, Ryker. She is also survived by her nephew Gordon (Emily) Booth and niece Laura (Ian) Drever and numerous other family members. Ruby was predeceased by her parents Ralph and Florence Booth and her brother Bill and sister-in-law Cleo Booth. The family wishes to extend a heartfelt thanks to the wonderful staff who provided invaluable care to Ruby through her illness. The family is especially grateful to the staff for allowing Ruby and Charlie to remain together in a shared room through her last days. Ruby's family will cherish her memory privately. Interment will take place at Brookdale cemetery at a later date. The family invites you to view the tribute video celebrating Ruby's life at www.memorieschapel.com. Donations in memory of Ruby may be made to the Samaritan House Ministries, 820 Pacific Avenue, Brandon, MB, R7A 0J1, or to a charity of one's choice.

When I come to
the end of my journey
And I travel my
last weary mile,
Just forget if you can,
that I ever frowned
And only remember
the smile.
Forget unkind words
I have spoken;
Remember some good
I have done.
Forget that I ever
had heartache
And remember
I've had loads of fun.
Forget that I've
stumbled and blundered
And sometimes
fell by the way.
Remember I have fought some hard battles
And won, ere the
close of the day.
Then forget to grieve
for my going,
I would not have
you sad for a day,
But in summer just
gather some flowers
And remember
the place where I lay,
And come in the
shade of evening
When the sun paints
the sky in the west.
Stand for a few
moments beside me
And remember only my best.
Expressions of sympathy
may be made at
www.memorieschapel.com