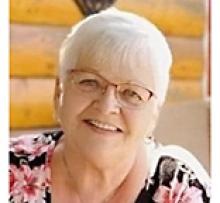 After a lengthy illness, God has taken His Angel Terry Jansen into his care on April 15, 2021.
Terry was born in Bladel, Netherlands to Louis and Wilhelmina Schoofs, and she was the youngest of ten siblings.
She is survived by her loving husband of 55 years, Bill; her three sons, Paul (Kerry), Jeff (Scott) and Kevin (Lisa); her beloved grandchildren, Brendon (Harmony), Karlee, Matthew, Robynne (Zac), Dominic, Matthew C, and Danielle. Terry is also survived by her brother, Louis (Anne) Schoofs; sister, Anne (Ted) Fleerakkers; brother-in-law, Peter Vosters; in-laws, John (Kathy) Jansen, Liz (Andre) VanGorp, Corrie Harder, Frank (Wendy) Jansen, and numerous nieces and nephews whom she loved dearly.
Terry especially wanted to thank Ashley, Brenda, Colleen, Rita, Helena and all the staff at Riverview Health Centre, 3 East Wing. She told us how compassionate and loving you were. "Doing God's Work" is what she called it...
In accordance with Terry's wishes, cremation has taken place and a Celebration of Life will take place at a later date.
In lieu of flowers, a donation to a charity of your choice is what Terry would have wanted - "make a difference" she always said.