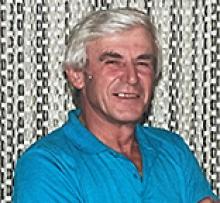 It is with profound sadness that we announce the passing of our beloved Dad, grandfather and great-grandfather, Reinhard Robert Bartsch, on April 17, 2021 at the age of 88.
Reinhard was born in Deutschhammer, Germany, on October 9, 1932 and was the oldest of five children born to Robert and Erna Bartsch. He is predeceased by his wife Helga Bartsch, and his brother Willi.
Reinhard will be very sadly missed by his daughters, Gabrielle and Martina (Sean); grandchildren, Nicholas (Samantha) and Christian (Jennifer); and great-granddaughter Deja. He is survived by his sister Edith, brother Rudi (Beate), sister Lilo (Herbert), nieces, nephews and extended family in Germany.
Our Dad was only seven years old when the Second World War broke out and soon after his father went off to fight on the front lines leaving his mother to manage alone with five young children. Sadly, his father died during the war, as did his youngest sibling Willi after contracting typhoid fever. In the spring of 1945, the family was ordered out of their family home when Silesia reverted to Poland, and nearly all its Germans inhabitants were forcibly repatriated to Allied-administered West Germany.
The family settled in Preetz, West Germany, and shortly thereafter, Dad began his apprenticeship as a tailor. Upon completing his apprenticeship, he left for Australia in March 1954 with his cousin Dieter, where he found himself working on the Snowy River scheme, a hydroelectricity and irrigation complex in southeast Australia. Three years later, in the spring of 1957, he returned to Germany and on a trip to Halberstadt (East Germany), he met the love of his life, Helga Poser.
One year later, in August 1958, Mom and Dad were married and set off on a ship to Canada. Having worked in Thompson, for a year prior to marrying Mom, Dad was familiar with Canada and wanted to return.
Mom and Dad quickly settled into life in Winnipeg, cultivating a large circle of friends, many of whom were also German immigrants and who they remained friends with until their passing.
Dad spent the majority of his life as a bricklayer and the legacy of his work can still be seen to this day at The Forks, Portage Place, Miles MacDonnell, St. Vital Sewage Plant, Fort Garry Place and many other sites throughout Winnipeg.
Dad loved his family immensely and the memories that Gaby and Martina have of time spent with him going swimming on Sundays, cross country skiing in the winter, bike riding in the summer and trying in vain to teach his daughters tennis will remain with them always. When his grandsons, Nicholas and Christian were born his life was complete and he was like a second father to them, spending countless hours playing with them, taking them bike riding, swimming and just basking in their exuberance of life.
Mom and Dad taught Gaby and Martina the true meaning of love, by the devotion they had to each other, the laughter they shared, and the enduring love which saw them married for close to 61 years.
Dad suffered from the Alzheimer's the last 13 years of his life, but despite the ravages that the disease had on his brain, he will always be remembered as our patient, fun, funny, kind, curious, adventure seeking, chocolate loving Dad, who will be forever in our hearts and thoughts.

Knowing that he is with our Mom
now and that their love will go on
for eternity comforts us.
Dad, know that your family misses
you immensely and that we will
love you forever and always.

The family is extremely grateful for the care Dad received by the staff on A1/A2 at Riverview Health Centre.
In lieu of flowers, donations can be made on his behalf to the Alzheimer Society of Manitoba.