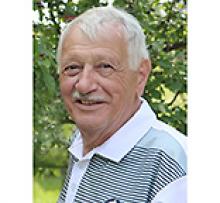 On April 16, 2021, after a courageous battle with cancer, Frank passed away peacefully at the age of 79. He died where he wanted to be - at home next to his loving wife, Carol, who tenderly cared for her partner of nearly 54 years during his illness.
Frank was predeceased by his mom, Giuseppina (1980), his dad, Carlo (1983), his older sister, Angela (2017) and his brother-in-law Lyle Wonnacott (2014).
Frank was born in the small town of Travedona, Italy on November 7, 1941. With the prospect of a new life in Canada, his dad moved to Birds Hill, Manitoba in 1949, and three years later, Frank, his mom and his sister joined him. The time spent growing up in this community, surrounded by his cousins, the Bindas, is where Frank learned about the bond of family, and forged many friendships that lasted his lifetime.
Frank met Carol by happenstance, as Frank was originally high school friends with her older brother Richard. The two young men would hang out together at the Chornick family farm, and soon, Frank began coming around less to visit his buddy and more to visit his younger sister. As time carried on, Frank offered to be Carol's chauffeur, taking her to and from various events she attended. Frank knew he found his partner in life and he and Carol were married in 1967.
Frank and Carol moved to Transcona, where they raised their family of three - Dean, Perry and Candra. Family meant everything to Frank, and his years were spent doing everything he could to help make many fond memories for everyone. The Favoni house was often the scene of large family gatherings and parties with family friends. Their cozy house always seemed so much cozier when family and friends were visiting. Holidays were spent fishing, camping and exploring many parts of North America in the family motorhome - sometimes just the Favoni five, sometimes with other families. Frank always made sure that no one was left out, and friends of the kids were always included on adventures with open arms - as far as Frank was concerned, they were also considered family.
When Frank wasn't busy modifying the family home, assisting Carol with what needed doing, helping family and neighbours with various tasks, performing community club duties, doing odd jobs at Transcona United Church, making wine or helping his children with whatever they needed, he found time to enjoy activities with his friends. Golfing, bowling, and playing various card games, including Cribbage and Blitz were a few that he loved, but by far, fishing was his favourite. With family and with friends, Frank would travel near and far for pickerel, but he was most known for travelling to Pinawa to catch goldeye and subsequently make his 'world famous' smoked fish.
Frank spent 36 years teaching with 35 of these years in various positions with Winnipeg 1 School Division. For the early part of his career, Frank worked as a classroom teacher and used his skills to help influence the next generation of citizens. After receiving his Pre-Masters Degree of Education in Special Education, Frank shifted his focus and began supporting kids with visual impairments. Eventually Frank shifted once more and finished off his career compassionately working as a teacher for students in hospital or at home who were recovering from injury or illness.
Frank will be greatly missed by his wife Carol; sons, Dean (Kathi Grossart) and Perry (Jennifer Riddell) and his daughter Candra (Murray Hanstead). His grandchildren, Trent, Reed, Grace, Ella and Callum will also greatly miss Pa/Papa, who was their playmate and greatest cheerleader. Many extended family members and friends are also left with a big hole in their heart now that Frank is gone.
Carol and her family wish to thank their extended families and friends for the outpouring of love, prayers and support during Frank's illness. They would also like to send special thanks to CancerCare Manitoba, Richard and the rest of the Palliative Care team for their help, guidance and support during this difficult journey.
In lieu of flowers, donations may be made to Transcona Memorial United Church (memo note: Building Fund) or to Palliative Care Manitoba.
Due to COVID restrictions, a memorial service will not be held at this time. An announcement regarding the service will appear at a later date.