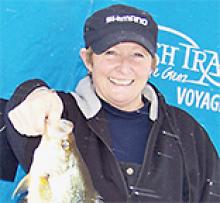 Quietly on April 17, 2021, Pauline passed away at the age of 71, at the Charleswood Care Home in Winnipeg. She was more than ready to join her beloved James, whom she lost to cancer in 2017.
Left to mourn her passing is her daughter Tracy (Paul) Lampert, son Richard (Laura) McKay, brother Michael (Barbara) Davies, and nephew Ryan (Blair) Lee. She leaves behind grandchildren, Emma, Ethan, Ella and Everest.
Pauline grew up in Winnipeg's North end, raised by "Aunty Bridie" with her two older brothers, Edward and Michael. Always a busy tomboy, she played every sport she could. Pauline also took time to play the organ for St. Edward's Church. After marrying her sweetheart, Jim, (at that very church) in 1970, they soon moved out to Portage la Prairie. While Jim got his accounting business going, Pauline had many different occupations, including being a mom to Tracy and Richard. She sold Tupperware, was in sales at Woolco, and worked as a secretary for the Portage Chamber of Commerce. She made lifelong friends at the Elm River Colony when she was a teacher's aid there. She enjoyed her time working at Berkley and at McCain's with all the extracurricular activities involved. She made friends everywhere she went, so collected quite a varied group of people! After winning her battle with breast cancer, she volunteered at CancerCare. Later in life she took up hiking, then golfing, but nothing could ever come close to her true love, fishing. She was happiest in the boat, rod in hand, surrounded by her family, at the lake.
We will miss her colourful character, busy personality, and everything she contributed to those around her.
A small family gathering will be held privately.