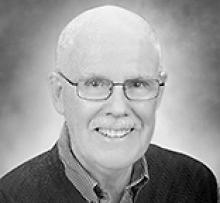 Jack Patterson, of Calgary, AB, passed away on Tuesday, April 13, 2021, at the age of 96 years.
Born in Winnipeg, Jack grew up on Brock Street with his parents, Earle and Emily (Judge), his older sister, Margaret, and, after the death of his mother when he was 12, his stepmother, Myrtle (Ruttan). He enlisted in the RCAF when he was old enough and was training as a navigator when the Second World War ended. Jack then enrolled in Engineering at the University of Manitoba but changed to Education after a year. He also studied drama at the Banff School of Fine Arts.
Jack met his beloved Kaye (Thompson) doing amateur theatre and they married on December 21, 1954. Together, they devoted themselves to raising their four children. Jack spent hours with his children, sharing with them his curiosity and love of nature. He took them camping, canoeing, and bird-watching. Jack was a devout Catholic. A member of St. Ignatius Church from birth until his move to Calgary, he could be heard in the choir with his beautiful tenor voice. On Sundays he enjoyed Mass and family dinner. The discussions were always lively. Jack kept a dictionary in the dining room (a helpful way to settle arguments before Google).
Jack started out teaching in a one room country school house. After teaching at Tec Voc and Earl Grey, he spent the last 24 years of his career teaching English at Churchill High. For many years, he directed the annual school musical. He is remembered by his students for teaching the pleasure of reading, and inspiring them to believe in their own talents. Some went on to teach and write because of him.
Jack loved to walk. His lifelong fitness helped him to overcome cancer twice and live to be 96. When he taught at Churchill, he walked or cycled there daily from his home in Crescentwood, even in the middle of winter. He walked regularly into his 90s. Jack also loved to learn. His varied interests included bridge, chess, history, local animal and plant life, books, and music (although his taste in popular music ended before the Beatles). He especially enjoyed spending time with his grandchildren, sharing ideas.
Kaye and Jack were married for 50 years. After Kaye passed in 2004, Jack moved to Calgary to be near his children. There he joined St. Pius X Church and sang in its choir, volunteered with Meals on Wheels, and continued to pursue his interests.
Jack built a good life for himself rooted in his love for Kaye, their children, his faith and his many interests. He will ever be remembered and loved by his children, Michael (Lesley), Sheila (Cliff), Thomas (Kelly) and Jerry (Marla); his grandchildren, Lauren, Claire, Hugh, Heather, Peter, Elena, Louise and Ryan, their partners, and his eight great-grandchildren. He was predeceased by his wife Kaye, and grandson Kyle.

Condolences, memories and photos may be shared and viewed on Jack's obituary at www.McInnisandHolloway.com