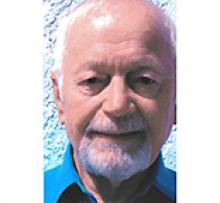 It is with deep sorrow that we announce the sudden passing of Emil Mathae at his home.
He will be lovingly remembered by his two sons, Derrick and Brian (Jason); grandchildren, Brett (Rebecca), Courtney (Brad) and Amanda (Ty); his sister Helga, brothers, Franz, Adolf and Helmut (Audrey), along with many friends and family in Canada, Austria and Japan. Emil was predeceased by his wife Theresa on March 23, 2020; parents, Franziska and Augustin Mathä; brothers, August, Josef, Bernhard, Hermann and Leander, and daughter-in-law Kathy.
Emil was born August 17, 1928 in Glashütte, Austria the second oldest of 10 children. He learned early in life about working hard and caring for younger siblings, traits which he carried all through his life. Emil immigrated to Canada in 1953 to continue his painting career alongside the Proksch family with whom he apprenticed in Austria. Canada was the place he realized he could make money to help his family back in Austria. Emil met Theresa (also from Austria) after arriving in Winnipeg. Like every storybook romance, these two adventurous souls met in a new country, fell in love, and married in August 1957. They were married for 62 years until Theresa's passing last year. Emil dearly missed the love of his life this past year. Family was very important to Emil and he was a strong influence on his large family spread across several countries. He kept in close contact with his siblings and his nephews and nieces and their children often communicating over Skype and email. Emil was the first pen pal of his nephew Peter over 55 years ago and that special friendship continued to this day.
Emil wasn't a fan of paint fumes and changed careers by becoming a carpenter. He was employed for many years as a carpenter with Nel-Wil Construction and Gateway Construction until his retirement. His carpentry skills allowed him to build his own home in 1960 which he remained in his entire life. He also built a cottage at Spruce Bay with his two sons. The family enjoyed many summers and winters there along with the many countless lifelong friends they made over the years. Emil took great pride in his home and yard, keeping everything is pristine condition.
In his retirement years, Emil immensely enjoyed babysitting his grandchildren and spent many hours in his woodshop creating projects for family and friends. He built his grandchildren a crib, high chair, craft tables and many amazing toys. In the later years of his retirement he became a very active volunteer with the Good Neighbours Active Living Centre. Emil was an integral part of the development of the Millennium Gardens and was the instructor of the wood carving class for many years which he gave up only to care for his wife Theresa as her health deteriorated. He also enjoyed the group golf outings with many of the members. In addition to his family he will be terribly missed by his lifelong friend Fred and his daughter Lisa; daughter-in-law Kathy's parents, Darrell and Margaret, neighbours, Peter and Sharon, Rob and Patti, and many friends from Spruce Bay and countless others.
A service will be planned at a later date for Emil and Theresa.
In lieu of flowers, donations can be made in Emil's name with the Good Neighbours Active Living Centre.