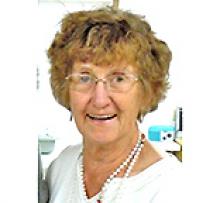 With great sadness after a lengthy and courageous battle Mae passed away peacefully at her home in Gateway Manor in Teulon, Manitoba on April 21, 2021, with her family at her side.
Mae is survived by her children, Robert Hoey, Lorna Hoey, Neil Hoey and Cathy Lifeso; grandchildren, Jay, Maegan, Jordan, Lindsay, Regeena, and Caitlin; great-grandchildren, Sadie and Lincoln. She is survived by her sister Phyllis Harvey of Pipestone, Manitoba, as well numerous nieces and nephews.
Mae is predeceased by her husband Roger in 2012; her sisters, Ruth McDonald, and Betty Redlin; brothers, Gerald and William Chudley; and her parents, Freda and Cleavland Chudley of Brookdale, Manitoba.
Mae was born in Neepawa, Manitoba on April 23, 1933. She grew up on the family farm in the area of Brookdale, Manitoba. As a young women Mae's plan was to be a teacher. She attended Normal School in Winnipeg in the early 1950s. Mae and Roger were married in Brookdale on July 25, 1953. In the years that followed Mae and Roger's family grew. Mae supported Roger in the hardware business and the small family moved from Brookdale to Semans and Bengough in Saskatchewan. The hardware business brought the family to Teulon in 1962. Teulon became home for Mae and her family. Mae was a loving mother to the four kids, was very active in the community and was a strong supporter and tireless worker for her other love, the United Church in Teulon. She was able to pursue her teaching career in Teulon. Mae and Roger were adventurous types and enjoyed travel, early on it was with the family on many wonderful and memorable summer vacation trips to many parts of Canada. Later on Roger and Mae made use of their growing free time to travel to many parts of the world, including the United States, Europe, Japan and Australia.
Mae (Mom) was a happy, kind and loving soul and was an inspiration to those she touched. She will always be dearly loved by her family and fondly remembered in the community.
A private family service will be held at a later date. Interment will be at the Brookdale cemetery.
In lieu flowers, if friends so desire donations can be made to CancerCare Manitoba, flowers are gratefully declined.
The Hoey family wish to acknowledge and thank the doctors and staff at the Teulon Hospital, Gateway Manor, staff at the Stonewall hospital and CancerCare Manitoba for their considerate and compassionate efforts, especially in these trying times.