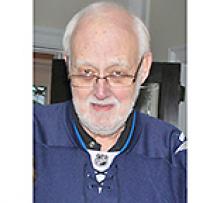 Born December 15, 1933, he passed very peacefully, after a lengthy illness, on Saturday, April 24, 2021, in the presence of family, at the Grace Hospital.
He leaves behind his sons, Michael (Donna) and David (Mary); his grandchildren, Sarah (Kevin), Samuel (Rebecca), Jamil, Isaac and Ava; and his great-grandson Solomon.
Predeceased by his parents, Alexander and Christina Thomson; and by his brothers, George (in infancy) and Robert.
Al was born in Winnipeg's west end during the depression. His father who had served in the First World War went overseas again at the outbreak of the Second World War. He returned to Al's family in 1943, following which they moved to Grande Prairie, to Truro, and then back to Winnipeg, as his father was posted in each as a military training camp commander.
At war's end they moved to River Heights (Sir John Franklin, he would emphasize), where Al attended Robert H. Smith School and Kelvin High School. He was a gifted athlete; a provincial high school champion at both quarterback and high jump, and a junior league baseball player.
He worked for several years as a draftsman at a foundry, Anthes Imperial Ltd., before returning to school at the University of Manitoba where he attained degrees in Arts and in Education. He was then employed for over 30 years with the St. Vital School Division. As a teacher and as an administrator, he worked at Dakota Collegiate, Minnetonka School, and Glenlawn Collegiate, where he made many lasting friendships among staff and students.
Like all grandparents his greatest pleasure came from following the activities and accomplishments of all his grandchildren. He also enjoyed spectator sports; fishing with buddies at Grass River Provincial Park and on Dauphin Lake; his several book clubs where, with friends, he could maintain his interest in both literature and history; and his Friday morning coffee club mates.
He taught his sons the exquisite mechanics of a ball well thrown and the perfection of a pass delivered with clear intention; the expression in a simple line of a picture, and the importance of the phrasing of a lyric; that the understated is often better understood; and the joys of irreverence and absurdity.
When these strange times we are currently struggling with finally end, a memorial event will be arranged and announced. In the meantime, you may share your thoughts and memories at www.wojciksfuneralchapel.com.