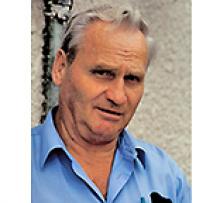 After a lengthy battle with cancer Daniel passed away at the Beausejour Hospital on Tuesday, April 27, 2021.
Daniel was born in Winnipeg, MB on June 23, 1937. He was a truck driver for 25 years for Kingsway Transport. He was so proud to receive his 1,000,000 miles for city driving award. He enjoyed having coffee every morning at the McDonald's on Nairn Avenue where he and his friends would gather and solve the world's problems over coffee. Later he moved to Dugald, MB and continued having coffee with his friends at the Chicken Chef.
He was predeceased by his beloved wife Iris Mastaler in May of 2013; parents, John and Anne Mastaler; brothers, Edward Mastaler and Bruce Mastaler.
Daniel leaves to cherish his memory his son and companion Sheldon, sister Mildred Parkinson of Huntsville, Alabama, USA and numerous friends.
Cremation has taken place and no formal service will be held.