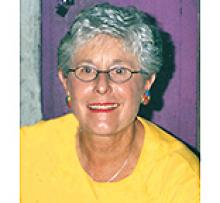 It is with immense sadness that family and friends announce Joann's passing at home on April 2, 2021, at the age of 87 years due to the lingering and devastating effects of Covid.
Along with her many friends, colleagues and cousins, she will be missed by nephew Dr. Bill MacMorran (Dr. Anh Thu Bui) and their daughter Sao Mai (Berkeley, California) and niece Kristin Garn (Kelowna, BC). She was predeceased by her parents, William and Annie Joanna (Jo) MacMorran; and her brother Dr. Ian MacMorran. Joann loved her family and was immensely proud of and committed to honouring their legacy.
Joann was a lifetime resident of Riverview, attended Kelvin High School, graduated from the Winnipeg General Hospital School of Nursing (1955), and Bachelor of Nursing, University of Manitoba 1965. Her early nursing career took her to Los Angeles, San Francisco, England, Calgary and in Winnipeg Victorian Order of Nurses, Provincial Public Health and Student Advisor at University of Manitoba, Faculty of Nursing.
In 1971, Joann began her trailblazing work as the Provincial Nurse Consultant in Tuberculosis and Chronic Pulmonary Disease that for the next 30 years would define the role of tuberculosis nursing care in Manitoba. Working with Dr. E. S. Hershfield and the TB team she visited many communities and reserves finding active cases, organizing treatment and teaching staff and families. Joann also gave workshops, presentations in North America, South America, Mexico, the Caribbean, Europe, and Taiwan. After retirement (2001) she joined the Canadian International Development Agency in a project in Guyana and made many significant contributions. Joann was a trailblazer in many facets of her life and she was recently honoured to be one of the 150 Manitoba Women Trailblazer Award recipients from the Nellie McClung Foundation. See her profile at: nelliemcclungfoundation.com.
As a young woman Joann was a keen sports buff, volleyball, biking, skiing and was the first Nurse at the Canadian Legion Athletic Camp at the International Peace Gardens. She maintained her fitness and was still rollerblading at age 70! She caught the travel bug early and had her first international trip "hitch hiking" in Europe. In 1994 she biked along the Danube River to Vienna. She loved travelling and acquired friends at every destination and kept up communication for many years.
Grand Beach, the cottage on Third Avenue (a family retreat for three generations) was her home away from home. Joann shared the stories and preserved the antiques and photos from the early days onwards. She loved music, theatre, art and was a supporter of the Winnipeg Symphony Orchestra, the Royal Winnipeg Ballet, Royal Manitoba Theatre Centre, Prairie Theatre and Manitoba Opera.
Many thanks for the caring leadership of her dear friend Barbara Shumeley, many home care and private caregivers and "Friendship Force" (a group of Joann's friends and colleagues) for all the love and support these past months. A celebration of Joann's life is pending.
Donations in Joann's memory can be made to WSO Sistema Program, an after-school music program for children with the greatest need. Send to Suite 2110-One Lombard Place, Winnipeg, MB R3B 0X3.