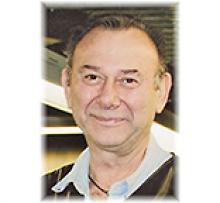 It is with deep sorrow that we announce the passing of Gerald after a short but very courageous battle with cancer.
He will be lovingly remembered by his two daughters, Kim (Brent), and Lee Ann (Lorne); and grandchildren, Lexi, Aiden and Brady. He is also survived by his sisters, Doreen (Barry) and Donna (Larry), many nieces and nephews, and his wife's family that were extremely close to Gerald, as well as numerous friends.
Gerald was predeceased in 2017 by his loving wife Joann, after 48 years of marriage.
Gerald easily made friends and was always seen with a smile on his face, often heard laughing and just loved to joke around with anyone, anytime. He took interest in many different hobbies throughout his life especially drawing and painting, but travelling with his wife was his true passion and they explored many places around the world together. One of his proudest moments was when he was offered the opportunity to share his impeccable welding skills while residing in Holland for six months. The highlight of his time there was when Joann joined him and they explored Europe together.
Gerald was a dedicated employee of New Flyer Industries for an impressive 40 years of service, during that time he was late only once, after that, he reported to work or anywhere else he was required to be at least an hour early, too early at times, such as him leaving us here on earth.
Cremation has taken place and a private Celebration of Life will be held at a future date.