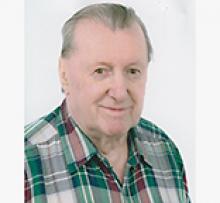 Charles passed away on Tuesday, April 27, 2021. He was the last member of his family.
He was predeceased by his parents, George Christian and Katharine Elizabeth; brothers, Gottfried and Henry; sister Mary Kirkcaldy; brother-in-law Jim Kirkcaldy; nephew Richard Sturtz, and niece June Kirkcaldy.
Charles is survived by his nephew David (Desi) Kirkcaldy of Tyndall, MB, niece Tambi (Steven) Dalman of Selkirk, MB, and cousins in Winnipeg and Surrey, BC.
Charlie was born and raised in Winnipeg's North End and had fond memories of growing up in that vibrant community. He attended Faraday and Isaac Newton Schools. As a young man, he enjoyed participating in the sports of hockey and football. He made lifelong friends during his employment years.
Cremation has taken place with interment in his parents' plot at Brookside Cemetery. A private service will be held at a later date.