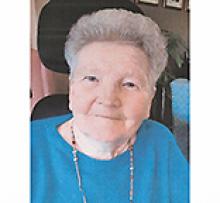 Peacefully on April 24, 2021, Olga Horon, at the age of 92, passed away at Tudor House Personal Care Home in Selkirk, Manitoba.
Olga is survived by her daughter Nancy (Milan) Lovenjak, and grandsons, Bryce and Luke; her daughter Irene (Rick) Horon; and her sister Alma (Hans) Alder in Germany.
Olga was born to Rudolph and Lydia Sturzbecher in Ukraine and had four sisters and three brothers. They were a loving, faith-based family that had to endure the trauma of war and loss of their father and brother. Twice they were forced to flee their homes and despite the devastation of war, loss and hunger they made it to Germany in 1945. In 1957 Olga bravely endured a 16 day rocky ship voyage to Canada where she was sponsored by her sister Adeline Pipke in Saskatchewan. In 1959 she moved to Selkirk where she met the love of her life, Steve, and they were married in 1960.
They moved to an acreage in East Selkirk in 1964 where they raised their daughters and had a massive garden. Olga was an amazing homemaker, cook, baker, knitter, gardener and hostess. She loved having visitors and enjoyed feeding them and giving them fresh garden vegetables and fruits, pickles or baked goods to take home. She was actively involved with the Blessed Virgin Mary Church and enjoyed volunteering. She was well known for always giving a helping hand to family, friends, and anyone in need. She dearly missed Steve when he passed in 2009.
Olga made the most of each day and cherished her family. She was always grateful and taught us to be humble and appreciative of everything we had. Most importantly, she taught us about the strength of the human spirit and the importance of family and faith. She was such a kind and loving soul and we were so blessed to have her in our lives for this long. In spite of many hardships she was always so positive and happy. May her beautiful smile and twinkling blue eyes continue to light up the heavens as they did on earth.
We would like to thank the staff at Tudor House who took such compassionate care of her for the last seven years.
A private family service will be held.