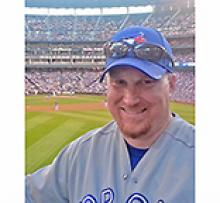 It is with great sadness that the family of Dan announce his sudden passing at home.
Dan was predeceased by his grandparents, Mortine and Hans Christian Jensen, Sofia and Harold Sr. Priestley and his parents, Sophia and Chris Jensen. He will be lovingly remembered by his common-law spouse Amber Brazil and their son Maddex; his three brothers and their families, Leonard (Debbie), Derrick, Lynsey; William (Kyla), Hayden, Marissa, Rylee; and Joseph (Erin), Dylan, Cody, Eric and Mathew.
Dan, affectionately known as Disco, was born in Teulon, Manitoba and spent the majority of his life on or near the family homestead East of Stonewall. Where he grew up building a lifelong circle of close friends, he considered family. There are too many to list, but they know who they are.
Dan graduated from Stonewall Collegiate class of 1987. He was elected student Vice President after giving a convincing campaign speech.
After high school, Dan attended Red River College and obtained a diploma in Sales and Marketing. Dan excelled in his 25 year career at The Brick with his tireless work ethic to attain his goals, and was admired by his Winnipeg West family. Dan was recognized for his achievement as top performer in the region and company. In a five year span Dan's name is engraved 39 times on The Brick's Top Monthly Performer recognition wall.
Dan had the gift for gab and would entertain his family and many friends with stories and his knowledge about sports statistics. Dan had many pleasures in life; he took great pride in being a father and role model to Maddex and coaching him in local baseball, while never missing the chance to watch the Winnipeg Jets, the Toronto Blue Jays or a Bomber game on TV. With a love for all sports Dan played hockey, most recently for the Stonewall Bullets. Disco loved spending time with his friends from pool parties, poker games, fishing, camping trips and the annual Mulligan Golf Tournament; and especially spending Christmas dinners with the Kroeker's, McIvor's and Willey's.
An all day viewing has been scheduled for Monday, May 10, 2021. Due to Covid restrictions the MacKenzie Funeral Chapel, Stonewall, can only accommodate 10 persons/ hour. Please call MacKenzie at 204-467-2525 to schedule a time to be able to pay your respects. A Celebration of Life will be scheduled in the future when Covid restrictions have lessened.
In lieu of flowers, please consider a donation to a charity of your choice.