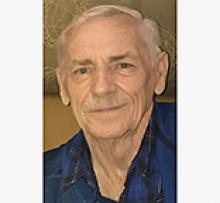 Peacefully on April 25, 2021 at his home, Alex passed away after a courageous battle with cancer.
He was predeceased by his wife Elizabeth in 2018, brother Edward in 2015, and tragically in his childhood his parents, August and Ethel, and all of his siblings, Robert, Jackie, and sister Ethel-Ann Klatt.
Left to mourn are nieces and nephews, Janice and Ron, Allan, Lloyd and Marlene, Russell, Mary Ann, Ronald and Wendy, Sylvia and Pat, Chris and Clark; cousin Sandy and friend Millie. When Alex lost his wife to cancer the effect it had on him was devastating and so Alex asked that a special tribute be given to his confidante and constant moral support, Yvette, who share a special place, bond and mutual respect in Alex's life.
Alex spent his early childhood and education years in the Anola area going to Queens Valley School and later attended Central School and Transcona Collegiate. In 1958 straight out of high school, he was taken on as a clerk with the Town of Transcona Tax Office. He transferred shortly to a similar office position with the Public Works Department.
July of 1960 he was successful in getting a transfer to the Town of Transcona Police/Fire Department as a police/fire dispatcher and clerk under Chief Joseph Teres. He was also assigned to complete court documents for the Justice of the Peace and also given the title Clerk of the Courts. It was also at this time he was hired by the RM of Springfield as a police officer working weekends on by-law and Provincial Statutes Enforcement. In 1964 he was transferred to active duty with Transcona as a police/fireman.
Alex was well known by Transcona school children for his lectures on traffic safety, spending three years as a school safety patrol officer and for his lectures to various service groups on drug awareness. During his police career, Alex worked his way up through the ranks from Constable, Detective, Sergeant 2 (Patrol Sgt.), Detective Sergeant, Sergeant, and retired as Staff Sergeant in charge of Drugs and Vice Division in 1994.
Active in the community of Transcona he was a member of the first Transcona Boy Scouts, a reservist with the Royal Canadian Engineers Militia and a fifty plus year member of Kilcona Lodge 183, Ancient Free and Accepted Masons.
Cremation has taken place and there will be no formal service. Alex will be laid to rest with his wife Elizabeth at Transcona Cemetery at a later date.
In lieu of flowers, donations may be made to the Humane Society or a charity of one's choice.

Friends and family are invited to leave
condolences and share memories by visiting
Alex's memorial page at seasonsfunerals.ca