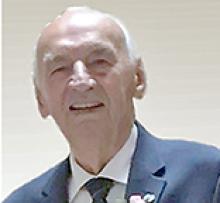 It is with great sadness that we announce the passing of the patriarch of our family, Donald Swistun at age 84. He passed peacefully at the Riverview Health Centre on April 26, 2021.
He was born to Helen and Peter Swistun at the Misericordia Hospital on June 5, 1936, the youngest of seven children. He was predeceased by his mother and father, his sister Kathleen (Michael) (Greg) Sawula, his brother William, sister Mary (John) (Patricia) Jasinowski, sister Etta (Len) Hayes and brother Mike; in-laws, Mary and William Broshuk, Steve and Raymond Broschuk and Larry Litke.
Left to mourn his passing are his loving wife of almost 63 years, Florence, his daughter Lori and son-in-law Mark Mirwaldt and his son Don. Don's greatest joy in his life was his family, nobody more important than his grandchildren and great-grandchildren: grandson Jordan and his wife Kristen, granddaughter Nichole, and grandson Dustin (Kayley). In the past few years we had two beautiful girls born to our family: Don's great-granddaughters, Ella and Avery Mirwaldt.
Don is also survived by his last remaining sibling and his wife, Henry and Shirley Swistun, and sister-in-law Lois Swistun. He will also be missed by in-laws, Elmer and Louella Broschuk, Marlene Litke and Shawna Rice. Don had a very large number of nieces and nephews, too many to mention, all that held a special place in his heart.
Don led an adventurous and fulfilling life, beginning with overcoming polio as a young boy. He went on to work on the family farm before beginning a sales career selling chainsaws, carpet and outboard motors. After a successful run in sales, he partnered with his brother Bill Swistun to start Birds Hill Gravel and Stone in 1964. He was well respected in the construction industry, and successfully ran Birds Hill Gravel for 44 years, providing many individuals with employment opportunities and lifelong careers. Don was one of the driving forces behind what is now known today as Silver Fox Estates, a housing development and park, recently renamed Swistun Family Heritage Park.
Don was an extremely friendly and outgoing man. He could be found regularly chatting with people wherever he went, be that in line at Superstore or the bank. As anyone who knew him can attest, he was the ultimate people person.
Don was a lifelong fan and supporter of sports. He enjoyed playing hockey and baseball as a kid. He went on to be his son's biggest fan and coach during Donnie's hockey career. Donnie's friends will all remember coach Don with fond memories. He was also an integral part of getting the project of the East St. Paul arena off the ground. Later in life, one of his greatest joys in life was following the education and sporting adventures of his grandchildren. No arena, court or pitch were too far for him and Florence to travel to. They loved doing this and Jordan and Nichole loved having them there.
Another big part of who Donald was - was his love of music. He played the fiddle in his younger years and guitar for most of his life. He didn't have any formal musical training and played music by ear. Wherever he was with his guitar, that is where the party was. Right till the end our husband, Dad and Papa enjoyed listening and singing along to his favourite tunes.
Don and Florence spent many vacations in Hawaii, Mexico, Texas, and Don's favourite, Las Vegas. They loved to travel with family and friends. Disney World with his grandkids in 1998 and in 2011 the entire family vacationed in Hawaii. This stoked his love of travel again and we went on to spend the next five winters in the family condo in Fort Myers, Florida. So many wonderful memories were made on these trips. We have the pictures to prove it.
Unfortunately, failing health ended the travel, but we are so lucky to have had these times.
Don and Florence moved into Concordia Village three years ago. There they reacquainted with old East St. Paul friends and made plenty of new ones. The family would like to thank the employees of Concordia Village and the home care staff that took wonderful care of Don over the last three years. Dr. David Martin and Dr. John Rabson were his doctors over the years, they helped him to maintain good health inspite of living with extensive heart disease. We are so grateful for their care.
Don's last two weeks were spent at the Riverview Health Centre where he received exceptional care from the doctors, nurses and health care aides. Thank you all for your kindness.
Although we knew we could not keep him with us any longer, we are going to miss the wonderful person that was our husband, father, papa and friend.
In lieu of flowers, the family respectfully requests that donations be made to the Riverview Health Centre, or the Heart & Stroke Foundation.
Memorial Service is on Tuesday, May 4, 2021 at 1:00 p.m. available by livestream - http://www.livememorialservices.com/Home/ServiceDetail/12867