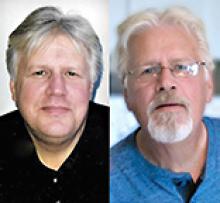 On Sunday, April 25, 2021, Gary Nault, much loved husband and father, passed away at the age of 72.
Gary was a big, easy going guy, seemingly never in any great hurry, possessed with a dry humour, a clever wit and perfect comic timing. He loved to putter around the yard or while away the afternoons browsing the stores. He was always up for "happy hour" with friends or family on a sunny afternoon. To know Gary was to love him.
Gary was predeceased by his mom, Vera Riley, dad, Gib Nault, and half-brother, Kevin Riley. He is survived by his wife, Lori, son, Jamie, and grandchildren, Wyatt and Leila. He is also survived by his three children from his previous marriage, Reagan Minten, Joey Nault and Wade Nault, his granddaughter, Rhian, his stepfather, Claude Riley, his half-sisters, Debbie Riley and Tracey Tomasson, and half-brothers, Geoff Riley, Derrick Nault and Dennis Fuerst.
Gary was born in Winnipeg, Manitoba, but spent his formative years in Atikokan, Ontario. After moving back to Winnipeg in the late 1970s, he spent the majority of his working life at Winnipeg Transit until his retirement in 2011.
We would like to take this opportunity to thank all those at Victoria General Hospital who provided comfort and care to Gary in his final days.
In lieu of flowers, if friends so desire, a donation in Gary's name can be made to a charity of your choice.
Based on Gary's wishes, cremation has taken place. Gary also had a singular specific wish for a funeral celebration. For some reason known only to him, something in Harry Styles' song, Sign of the Times, spoke to him. He was adamant that it should be played for him upon his death. Those of you who wish to, please take a moment to listen to the song and think of Gary.

Remember, everything will be alright
We can meet again somewhere
Somewhere far away from here.