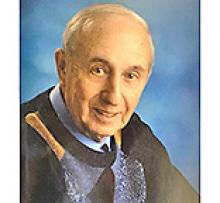 Peacefully on April 24, 2021, Cy passed away at the Victoria Hospital at the age of 95.
He will be sadly missed by his wife of 30 years, Patricia; his three children, Judy (George), Elizabeth, Gordon (Cynthia); his three stepchildren, Ronda, Shelley (Chris), Bradley (Laura), and his grandchildren and great-grandchildren.
He was predeceased by his parents, Samuel and Sarah, and his first wife Florence.
Cy grew up on Atlantic Avenue and was always proud of his North End roots. He attended Daniel McIntyre High School. Growing up he enjoyed many sports including soccer, hockey and playing golf with his father at Kildonan Golf course. He played golf until he was 87 years old. In 1946 he had the opportunity to play soccer with the Chicago Maroons in the American League Soccer Club. He was to be paid $25 a game. His father advised him that school was more important so Cy turned down his soccer career and instead went to the University of Manitoba. He graduated with an Engineering Degree in 1950.
He worked various jobs after school and ended up with Manitoba Hydro as the Rates Manager. In the early 1990s he spent two years in Zimbabwe with Manitoba Hydro International. Pat and Cy were married in Harare, Zimbabwe in January 1991. When they returned back to Winnipeg Cy retired from Manitoba Hydro.
In 1968 Cy purchased a cottage at West Hawk Lake and enjoyed many years with family and friends at the cottage.
In retirement Cy enjoyed golfing and travelling the world. Pat and Cy travelled Europe, Australia and enjoyed winters as snowbirds in Texas and later in Victoria, BC.
The family would like to thank Veteran Affairs Canada for all their support they gave Cy over the years. We would also like to extend our heartfelt thanks to Victoria Hospital particularly 4 North for their great care of Cy and to all the friends and family who offered their support and prayers.
In accordance with Cyril's wishes, cremation has taken place and there will be no formal service.