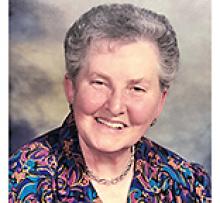 Peacefully on Saturday, May 1, 2021, at Seven Oaks Hospital, Margaret Carr passed away at the age of 95 years.
Margaret was predeceased by her parents, Walter Carr and Nellie Carr (nee Pincock). She will be lovingly remembered by her extended family (the Carrs and Pincocks), her 'honorary family' (the Meadows and Schapperts) and her friends both near and far.
Margaret was born in Roblin, Manitoba in 1925 and lived in the family home on the edge of town for the first few years of her life. Her family moved to Winnipeg's Wolseley area in 1930 where Margaret attended school and established a number of lifelong friendships. She graduated from Gordon Bell High School in 1942 after which she took a secretarial course. Margaret obtained a job with the Manitoba Government in 1947 where she worked diligently as a legal secretary for more than 34 years - receiving a Meritorious Service Award in 1982 shortly before she retired.
Margaret was a long-time member of the St. Stephen's Broadway United Church where she was a dedicated and passionate member of the choir for many decades. Her love of music was clearly apparent as she regularly listened to classical music on CBC radio and attended the Winnipeg Symphony Orchestra throughout her life.
Margaret played tennis when she was younger and was a member of the St. Boniface Golf Club for many years. She enjoyed playing these sports, introducing them to others and sharing her passion for them. When she was not actually playing, golf could often be found on Margaret's television and many late nights and early mornings were spent watching the Wimbledon Championships with her dear friend Gloria over the years.
Margaret valued her friendships and cherished her extended family relationships. She was a quiet, confident and adventurous woman who travelled throughout her life and was happy to visit family and friends and share her adventures and experiences with others. Margaret was an avid reader who loved to discuss books and give and receive recommendations for a good read. In her later years, Margaret loved to walk in the forest at Fort Whyte and spend time sitting on a bench with a friend to chat and just watch the wildlife.
Margaret was a true friend and loving member of her family. She will always be remembered for her kindness, her genuine thoughtfulness and caring, as well as her bright mind and interesting conversation. Those who knew her were lucky to have had her in their lives and are no doubt thankful for all the love and special times which were shared.
Thank you to the staff at both the Grace and Seven Oaks Hospitals for their dedicated and compassionate care during Margaret's last few weeks.
In accordance with Margaret's wishes, cremation has taken place. A private graveside service will be held with interment at Elmwood Cemetery.
In lieu of flowers, memorial donations may be made to either Fort Whyte Alive or the Winnipeg Symphony Orchestra.