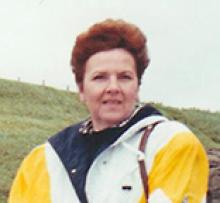 It is with deep sadness that we announce the sudden passing of our beloved Wife, Mother, Granny and Great-Granny, June (Haggan) O'Donnell, age 71 years, at the Grace Hospital on Monday, April 26, 2021.
Born in Belfast, Northern Ireland on June 9, 1949, June was the fourth of six children born to Martha and Thomas Haggan.
June immigrated with her family on December 28, 1974 to begin a new life in Winnipeg, Canada. June and her family found a home away from home as members of the Irish Association of Manitoba and participated in many functions as well as Folkloramas over the years, and made many new friends in the Irish community in Winnipeg.
In 1977, June began work at Boeing, first working on the shop floor and then moving to the Human Resources department. It was a job June loved and and spoke fondly of over the years. June retired in 1993.
June will be remembered as a loving and gentle soul, who adored her family, took great pride in her summer garden every year, took to her sewing room to create beautiful things for her children and grandchildren, all out of love, and doting on her beloved dogs over the years, who were her pride and joy. June was a fabulous cook and an excellent baker.
Left to mourn June's passing but celebrate her life are June's loving and devoted husband of almost 40 years, Robin, June's daughters, Tracy, Debbie (Lyle), Jennifer (Kim) and Kathleen, June's sister Maureen (Dennis), June's sister and brother-in-law in Ireland, Betty and Norman Carmichael, June's nephew in Ireland, Alistair Carmichael (Mary), June's sister and brother-in-law in Ireland, Thelma and Herbie Frances, and her brothers, Brian (Shelley), Jim (Jeanette) and Thomas. Also left to mourn June's passing are her grandchildren, Matthew, Gabrielle (Ivo), Rachel (Austin), Sophie and Izzy, as well as great-granddaughters, Thea and Arya, her grandnephew Zach, grandnieces, Anna and Meghan. June's many nieces, nephews, cousins, extended family and friends also mourn June's passing but celebrate June's life in Ireland, the UK and Canada.
June will be sorely missed by her beloved dogs Jilly and Gracie.
June was predeceased by her parents, Martha and Thomas Haggan, and her eldest brother David.
In keeping with June's wishes, June's final care was placed in the compassionate hands of Holly (Charney) Fjeldsted of Seasons Funeral Services in OakBank, MB.
Cremation has taken place. Due to Covid 19 no service will be held.
In lieu of flowers, donations to June's favourite charity, Operation Smile, may be made in her memory.
Friends and family are invited to leave condolences and share memories by visiting June's memorial page at seasonsfunerals.ca

"Life may not be the party we hoped for,
but while we are here, we should dance."