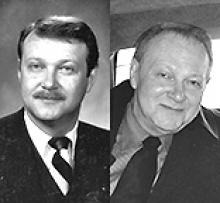 It is with deep sadness we announce the passing of Rick Edwards on April 19, 2021.
Rick was born October 16, 1944, the only child of Anna and Robert Edwards. He was predeceased by his parents, dear cousin Brian Presentanz and best friend Robert (Bob) Southam. Immediate family left to mourn his loss are his partner and wife of 20 years, Barb Unrau, cousins, Claudette Presentanz, June (Ron) Rogowski, Darryl (Mary Anne) Preisentanz, as well as many dear friends in Winnipeg and Regina.
Education was extremely important to Rick, and he made it his lifelong goal to never stop learning and challenging himself. He graduated from St. John's High School in 1962, took a year of Engineering at the University of Manitoba, worked as a surveyor for a year, and then enrolled in the Business Administration program at MIT (Red River College).
After graduating at the top of his class from Red River in 1967, he successfully passed the Preparatory Merchandising Course for the Hudson's Bay Company which launched his long and very successful career in retail management. It didn't take long for Rick to move up the ladder from assistant department manager to managing his own departments and ultimately joining The Bay's buying team for stores across Canada. He fondly recalled the many buying trips he and the team made to Montreal.
In 1971 The Bay transferred Rick to Regina where he made many new friends. Rick loved music and dancing, and recalled many great times spent at The Old Gold. He also became a dance instructor for Arthur Murray Studios during his time in Regina. In 1977 Rick found himself back in Winnipeg pursuing a new career after The Bay underwent a major downsizing of senior management positions.
True to his conviction to never stop learning, he embarked on a new adventure in real estate. He began his career with Royal LePage in the early 1980s and retired from Century 21 in 2004. During this period Rick took time off to pursue other interests, including managing a Marks Work Warehouse outlet, the CANEX military convenience store in St. James, and working for one season with Canada Revenue Agency.
Rick was a huge NFL fan and had an amazing mind for statistics. He also loved the CFL, baseball, hockey and curling. To keep his brain sharp he worked on crossword or Sudoku puzzles every day.
In 2001 Rick's love of dance drew him to an open dance at the Ted Motyka Dance Studio where he met Barb. It didn't take long before their mutual love of dance turned into their love for each other. They spent many wonderful years with their dance buddies at the studio and dance events throughout the city. They also enjoyed travelling and loved good wine, good Scotch and good friends.
A heartfelt thank you to Doctor Wayne Manishen (Assistant Lonnie) for the excellent care provided over the years; Rick truly admired and trusted you. And finally, to the cardiac ICU team of doctors and nurses at St. Boniface Hospital, we are truly grateful for everything you did to give us an extra 12 days together.
No service is planned at this time.
Should you so desire, donations in Rick's memory can be made to the Heart and Stroke Foundation of Manitoba or a charity of your choice.