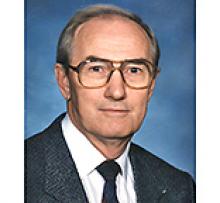 It is with deep sadness that we the family of Peter L. Friesen - wife, Rita and children, Joyce Locht (Randy), Allan Friesen (Rose) and Lyndon Friesen (Ellen) - announce his death on Monday, May 3, 2021.
Peter was born in Schanzenfeld, MB to John and Helena Friesen. He was the middle of 13 children. Peter and Susan Fehr (d. 1996) were married in 1951, began farming in Schanzenfeld and were soon joined by three children. At this point, Peter made a career change. With three preschool children, he returned to high school and then teachers' training in Winnipeg. In 1958, Edward School District's one room school was Peter's first teaching job. He taught Canadian and American history in Winkler, Morden and Winnipeg. His work life also included many years as a high school principal in East Kildonan. He thrived as a teacher and school administrator.
Peter was a born optimist with good measure of curiosity and remained so late in life. Unfortunately, his lively mind was overtaken by Alzheimer's disease in the past five years, though his cheerful nature remained to the end.
In his young adult life, he enjoyed playing hockey, curling and coaching baseball. His mechanical aptitude was applied to many of the used cars he drove. He was interested in and enjoyed friendly debates and discussions about education, politics and theology. His grandchildren noted his philosophical bent in a question like: "What is time?" Challenges and losses were met with steadfast trust in God's infinite love and wisdom and he encouraged his family to "keep one eye on reality and one eye on hope." Aside from his work as an educator, he also enjoyed serving in various church leadership roles and as a board member of Youth For Christ for 30 years.
Rita and Peter were married for 15 years - enjoyable rich years for them and their relationship enriched all the family. They moved to Winkler five years ago and there enjoyed the company of siblings and cousins. Here, Peter launched one final project. He was pleased and deeply grateful for the opportunity to help establish a regular Sunday church service at the community assisted living community home where they lived.
He was predeceased by his wife, Susan, daughter, Louella and son, Rodney. He will be missed and lovingly remembered by his wife, Rita, brothers, John, Abe and Irvin, his three children, seven grandchildren, three great-grandchildren, friends, as well as numerous nieces and nephews.
A private graveside service was held at Glen Eden Cemetery in Winnipeg.
Donations to honour the memory of Peter can be made to Youth For Christ Winnipeg, 333 King Street, Winnipeg, MB R3B 0N1 www.yfc.ca