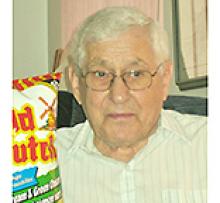 Peter Harder, 97, died unexpectedly at home on Tuesday, May 4, 2021, in Winkler, MB.
He was born on December 11, 1923 to Peter and Margareta Harder in Winkler, MB. After completing high school in Winkler he moved to Kane, Manitoba to work for John J Toews in the Kane Store & Garage. He spent his entire working life in Kane, becoming an integral member of the community and eventually buying the business. He married Marion Wiebe on July 26, 1952 and they had three children, Vivian, Les and Kevin. In 1997 he closed the business and moved back to Winkler where his life had begun.
Peter is survived by his wife, Marion, children, Vivian (Ron), Les (Heather) and Kevin (Michele), grandchildren, Vanessa, Derek (Cara) and Kendra, great-grand-children, Alex, Zak and Quinn and siblings, Anne and Mary, sister-in-law, Sally. He was preceded in death by his parents, siblings, Margaret and Walter and brothers-in-law, Abe, Henry and Marvin.
Given current Covid-19 restrictions, a private graveside service was held at Westridge Memorial Gardens.
Donations may be made in Peter's memory to a charity of one's choice.