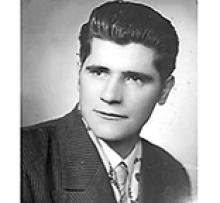 With family by his side, Venanzio passed away peacefully at age 91 at Misericordia Place.
Venanzio leaves behind his wife Concetta; daughter Anna Maria (Randy), son Peter (Carolyn) and daughter Gabriella (late George Szilvasi); as well as his grandchildren, Justin (Kailey), Jessica and Brayden. Venanzio was predeceased by his father Silvestro, mother Anna; brothers, Domenico, Dionisio; sisters, Gilda, Annunziata and Maria.
Venanzio was born in San Giorgio di Crognaleto, Teramo, a pastoral village in the Abruzzi region of Italy. As children, pa' regaled us with his stories of tending to his flock of sheep, his military service in the Alpini mountain infantry division of the Italian army, and his years as a coal miner with his brother Domenico in Charleroi, Belgium. Venanzio and Domenico were part of the 50,000 Italian coal miners that worked in Belgium coal mines after the Second World War.
In 1959, Venanzio immigrated to Canada and joined his brother Domenico in Winnipeg. This was the start of the great wave of Abruzzesse immigration to Winnipeg, and many paesani families followed in the 1960s. Venanzio lived for over sixty years in the Fort Rouge, Lord Roberts area, a very densely Italian populated neighbourhood until the 1990s.
Venanzio was a hardworking man, a cement finisher who helped construct many of the tall buildings that made up the Winnipeg skyline. He was particularly proud of having worked on the Richardson building, Winnipeg's first skyscraper, which was completed in 1969.
In his retirement years, Venanzio's passion turned to running marathons, and due to his peak physical conditioning, he continued competing until his late 70s.
Sadly, during the last years of his life, Venanzio's mind was ravaged by vascular dementia. Yet, he was greatly comforted by his memories of his sheep flock, as well as his organetto playing. Venanzio especially loved listening to organetto music and it was a blessing to see him respond to this wonderful music.
Due to Covid restrictions, a private funeral will be held.
In lieu of flowers, it would be greatly appreciated that donations be made in Venanzio's name to the Alzheimer Society of Manitoba.

For online condolences or to light
a memorial candle please log on to www.mosaicfunerals.ca