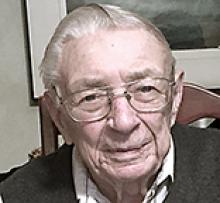 On April 28, 2021, Keith passed away peacefully at the Victoria General Hospital, Winnipeg, MB, at the age of 95.
Keith will be lovingly remembered by his daughter Lori (Wayne) Yarchuk; grandchildren, Ryan, Colin and Kathryn Yarchuk; sister-in-law Grace Pidgeon; and nephews, Ted Pidgeon and Don Pidgeon and their families. He was predeceased by his wife Dorothy Kruger in 2007 and infant son in 1963.
Keith lived most of his life in Pine Falls, MB, his family moving there from Oakbank in 1926, when his father took a job with the newly built pulp and paper mill. His love of sports began at a young age. He was a natural athlete and participated in everything from hockey and baseball to curling, tennis, bowling, skiing and more. But his favourite sport by far was golf. His love for the game extended throughout his life, playing and winning several provincial tournaments in his twenties and thirties, playing recreationally with Dorothy throughout their marriage, and teaching and inspiring his grandchildren to play in his later years.
He was also an avid outdoor enthusiast, biking to work from May till November, cross-country skiing in winter, enjoying walks in the woods in and around Pine Falls and hunting in the fall.
Keith had many interests and his curiosity about how things worked was a constant throughout his life. Being mechanically inclined, he loved gadgets and was always eager to try out the latest innovation. He was fascinated with anything to do with planes and flying, and said his one regret was never becoming a pilot.
Keith worked in the Engineering department of Abitibi-Price pulp and paper mill for 45 years, retiring in 1990. He was renowned within the department for his ability to problem-solve based on his sharp "archival" memory and extensive knowledge of both the mill and the town. He played an active role in the community, giving his time and talent to a number of organizations, boards and committees for over 50 years. He was instrumental in the start-up of the Duck Lake Ski Club and as a long-time member of the Pine Falls United Church congregation, spent many years on the board.
Moving to Winnipeg in 2000, Keith and Dorothy were able to spend more time with family and participate actively in the lives of their grandchildren. Keith never missed a hockey game, baseball game, volleyball game or band concert. He was a devoted caregiver to Dorothy through her battles with breast cancer in 1999 and ALS in 2005, and was a constant daily presence during her final 18 months in hospital.
Keith continued to embrace life after Dorothy's passing and while still being a busy granddad, turned his love of food into a quest to visit as many local restaurants as he possibly could. He would be recognized as a regular at those that were his favourites, with many servers knowing him by name. He could always be trusted to tell you where to find the best desserts. Keith spent his final years at Seine River Retirement Residence and enjoyed both the care provided by the staff as well as the food.
Keith will be fondly remembered as a kind, modest and patient man with a sharp mind, sense of humour and curiosity about the world around him. He was content with his own company, but also a great conversationalist, knowledgeable on a broad range of topics. He was a loving father and grandfather who over the course of his life consistently modelled a quiet dignity and strength of character, enjoyed the simple pleasures of life, and delivered great one-liners with a twinkle in his eye.
The family sincerely thanks the many Homecare staff who cared for Keith, allowing him to live independently for as long as possible. Thanks also to the 5th floor staff at the Victoria Hospital where Keith spent his last few weeks.
In lieu of flowers, please consider a gift to CancerCare Manitoba or a charity of your choice.
Cremation has taken place and a private family memorial will be held.
Family and friends may sign a book of condolence at www.glenlawn.ca.