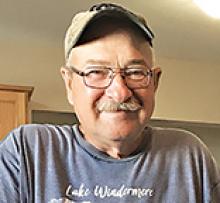 It is with heavy hearts we announce the passing of Robert "Bob" Szklaruk in Ashern, MB.
Bob is predeceased by his parents, Mary and John Szklaruk and his grandson Burke Szklaruk.
Bob was born and raised in St. Martin, MB. He attended Karpaty Elementary School and graduated from Gypsumville High School. He then furthered his education in The Pas, MB and got his electrical degree.
In his younger days, he played fastball with the Hi-Jackers. He became very well known in the area as the pitcher who could fan even the best hitter out. He drove many different cars over the years and loved them all - the faster the better.
He had many jobs which took him all over the world. Throughout the years, he worked for MB Highways Dept. He also worked as a bee farmer, a trapper, a fisherman, a restaurant owner and an original partner in the St. Martin Fish Agency. He installed DWDM fibre optic systems working for Ciena all over Europe, Mexico and the States - they called him Country Bob.
Bob's greatest passion was being a commercial fisherman. He took pride in being the first one out on the ice every year. He fished many years with either his brother Johnny, his dad John, Jason Budge or son Chad.
He loved playing card games with everyone, especially his favourite whist partner, cousin - Robert Yanke. He enjoyed spending the summers in his garden, cooking huge meals and canning his garden goods. He enjoyed hunting with his friends and family. He loved when his family and friends would call and visit. He was always known for having a positive attitude and a smile on his face.
He is responsible for developing the Maple Beach Condominiums and took pride in the Corn Roast every year where he would organize horseshoe and lawn darts tournaments. He had great relationships with everyone who had a cabin here.
He is survived by his brother Johnny (Linda) of Gypsumville, MB; his three children, Chad (Janyne) of Palm City, Kayla (Brian) of Winnipeg, MB, Kari (Matthew) of Winnipeg, MB and five grandchildren, Haleigh, Max, Kemery, Tory and Quaid and honorary son Jason Budge of Ashern, MB.
As per Bobs wishes, no funeral services will be held.