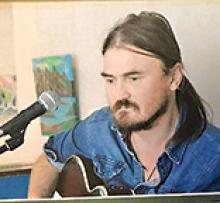 Paul William Nurmi was born on September 2, 1969, in Winnipeg, Manitoba, to Doris and Norman Nurmi. He died on May 3, 2021, in Winnipeg where he resided his entire life. He was baptized in 1987.
His struggles from early childhood helped to mold him into being sensitive to the physical and emotional needs of others. This desire continued into his adult years. He was grateful for many opportunities to do this through his speaking and music. He had a remarkable gift to do both! Family and others that knew him were blessed by his humour and great insights into matters of life and death. There was always a new song that he had written to be listened to! He rarely went anywhere without his guitar! Never a dull moment! Paul was fiercely independent with a determination not to be a burden to anyone.
Paul graduated from Transcona Collegiate Institute in 1988. During these high school years he won a number of awards including two Outstanding Contributions to Music awards. In 1993 Paul graduated from Providence College and Seminary with a Bachelor of Arts degree. His desire to continue his education was frustrated by several health issues which were gradually worsening as time went on. He did become discouraged at times. Full time Christian Ministry was a goal for him.
His work with a Downtown Mission in Winnipeg touched many lives. This was through his words and his music. He will be missed! Winnipeg downtown has lost one if its most important Buskers!
Paul Nurmi is survived by his mother Doris Nurmi Beaton; his sister Tammy (David) Branco, his sister Mary Anne Nurmi; niece Emily Branco; nephew Cullen Mackenzie; Aunt Elma (Robert) Schemenauer, Aunt Esther Martens; best friend Kerri Krysanski, as well as other friends and family. Paul was predeceased by his father Norman Nurmi; his grandparents, Peter and Agatha Martens; grandparents, Eva and Niilo Nurmi; his uncles, Wally Martens, Harold Nurmi and Edwin Nurmi; and his Aunt Minerva Oikonen.
There will be a celebration of Paul Nurmi's life at a later date.
Contributions may be made to Canadian Diabetes Association or Epilepsy Canada.