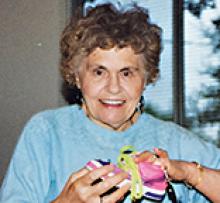 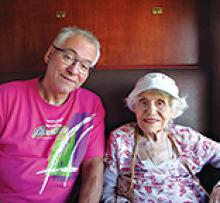 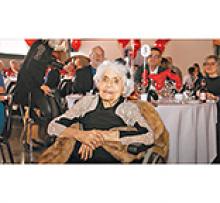 With sadness, we announce the passing of our loving and devoted mother, grandmother, great-grandmother and friend to all whose lives she touched. Sophie left us peacefully at her residence at Fred Douglas Lodge in Winnipeg, Manitoba in her 104th year.
Raised in a farming family in Poplarfield, Manitoba, Sophie helped raise her six younger siblings making her a natural at mothering her own six children.
She is survived by her children, Jean (John), Mary (Peter), Dan (Ann), Leonard (Franca), Robert, John (partner of late daughter Patricia); her grandchildren, Lisa (Mike), Lara (Julian), Jeannie (Ryan), Sam, Jaclyn, Mikyla (Wes), Brandon (Ula), Allie, Michelle (John); and her great-grandchildren, Sophie, Ava, Max, Brady, Brooke, Felix, Walter, Nathan, Whitney and Maxson. Sophie will also be remembered by her many nieces, nephews and extended family.
Sophie was predeceased by her husband Myron, sisters, Mary, Stella and Olga; brothers, Johnny, Mike and Eugene; daughter Patricia, and son-in-law Joe.
Sophie lived a full, active life - enjoying concerts, music, baseball games, horse-racing, Folklorama and being with family. Sophie was very involved in the Ukrainian-Canadian community based out of the Ukrainian Labour Temple in Winnipeg. A farm girl at heart, gardening and cooking were always a passion. Preparing huge meals, wonderful soups and hand-made perogies were her specialties. Sophie was always content with what she had - never wanting for more and never caring much about material things. What mattered to her most was being near the people she loved.
Sophie instilled in her children and grandchildren many values and skills that have served them well, such as incredible work ethic, perseverance and strength. She will be dearly missed and forever in our hearts.

We love you Baba, Sophie.
Chom-Chom-Chom.