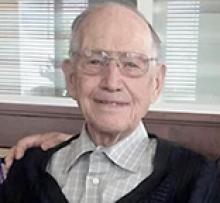 On May 9, 2021, Al Lyons, aviator and refiner, passed away at the age of 97.
Al is survived by his loving wife Jean; three sons, David (Dianne), Jim (Debbie) and Neil (Loretta); eight grandchildren, Jennifer (Casey), Matthew (Laura), Steve (Lori), Chris (Kendall), Mike (Janice), Katie (Jordie), Isabella and Georgia; and his nephew, Howell (Shelly). He was predeceased by his brother Leonard, sister-in-law Mary, his sister Muriel Meadows, and brother-in-law Ed Meadows.
Allan took an interest as a teenager in mechanics and aviation. The time was right for him, as the Commonwealth air schools were opening up all over Western Canada, where it was decided that good weather made it possible to train pilots from the Commonwealth, USA and Poland. Allan was fortunate to learn all aspects of aviation, spent three years training and was posted in England, where he worked at Tempsford Airfield. His final work was preparing DC3 aircraft to deliver men and material to fly to Calcutta to finish the war in Burma. He met and married Jean prior to finishing his posting in 1947, at which time they both returned to Winnipeg. He joined Imperial Oil Refinery in 1950. Through the 1950s and 1960s, Esso had seven refineries, and Allan went to all of them to help them to shut down and start up. After retirement from Esso, he went to Alberta Aviation Museum, where he was President for two years. He started Fly For Fun Inc. in Winnipeg and Edmonton. Al and Jean would have been celebrating their 75th Anniversary this year. Allan "slipped the surly bonds of Earth" with no ceiling and unlimited visibility