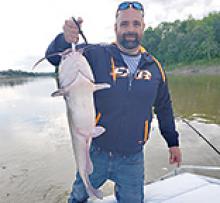 Lee passed away suddenly, at the age of 40, with the love of his life by his side on May 11, 2021.
Born on November 3, 1980 to Bruce and Kathy Scott and raised in East Selkirk, MB, he grew up surrounded by family, friends and his younger brother Matthew (Brittany). He always loved anything to do with the outdoors, spending time with his grandparents, June and Ron and extended family in Lockport. He always excelled in everything he put his mind too. Lee pursued a brief career as a paralegal before finding his calling to help people as a trades plumber. His dedication to his career, whether it was at work (Middlechurch Care Home), around the house or helping out someone else with their projects was his identity. It was rare to see him in anything but work clothes, even bright and early on weekend mornings.
The most important part of life to Lee was his family, after meeting Angela early 2015, he accepted all of her kids as his own without a thought. There was no such thing as 'step' or 'half' family to him, family was family.
Survived by children, Bailey (Mathew), Ashlyn, Emily, Marcus, Elizabeth and Parker, and at rest now with his previously deceased son Hunter. Lee loved teaching his kids new things, whether it was fixing things around the house or working on his vehicles he always had time to train a willing helper. At the end of each day, you could always find him cuddled up on the couch with whichever kid was closest for him to grab and pull in. The best quality time to Lee was taking everyone out on the boat to do some fishing in Lac Du Bonnet.
Right till the end, Lee and Angela had been working everyday tirelessly building their dream home, planning their upcoming wedding, making plans for a family cabin and joking about when they could finally have grandbabies. He could not wait for the days ahead of them and the life they would be living together.
Lee was the light of so many peoples lives. To know him was to love him. He will be so greatly missed but we know that wherever he is, he is making the best of it and watching us with a smile on his face. Lee would not want people to sit inside mourning him, he would tell us all to get up, get outside and get stuff done, he would remind us that he was the lucky one to have known and loved so many of us. His ideal Sunday was to spend all day smoking some meat, preparing a big dinner and having everyone around the table together. That is the way we must remember him, by cherishing the ones around us and never taking a moment for granted.
The family would like to thank the paramedics who came to the home and did everything they could, nurses, doctors and all other hospital staff in the St. Boniface Hospital Emergency Department for their exceptional efforts and compassion.
In lieu of flowers, donations can be made to the Heart & Stroke Foundation or any children's charity of your choice.
Lee's remains will be cremated and further service arrangements will be made when all who loved him can safely gather together.