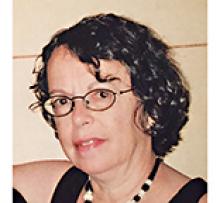 In loving memory of our dear wife, mother, and grandmother, who passed away on Wednesday, March 14, 2018 at 68 years of age.
Marcia (Marcy) was born in Winnipeg on February 3, 1950. She was predeceased by her parents, Eva and Jack Mallin, and her mother-in-law Bessie Stronger. She is survived by her husband Barry, her children Michael (Zoa) and Lyle, her brother Jerry (Marilyn), and her sister Wendy.
In her professional life, Marcy was a registered nurse with a bachelor of nursing degree from the University of Manitoba. She was especially interested in geriatric and pediatric medicine. In the early years of her married life, she worked in what were then referred to as the "Municipal Hospitals", tending to polio patients who had survived the 1950's epidemic. When her children were born, she gave up her career to become a full time mom, and oversaw a warm, fun, and nurturing household. Later, once her children were both in school full time, she returned to the workforce, this time in the day care field, caring for infants and toddlers.
Marcy was an extremely caring and accomplished person who excelled in caring for people in need. By way of example, she made certain her mother-in-law had the best of care in her later years. She would personally check on Bessie daily to ensure that she was well and to keep her company. This also applied to her own parents during their serious illnesses, as she arranged for and supervised the appropriate home care. For Marcy, family always came first.
Marcy and Barry led an active social life, enjoying the symphony, theatre, movies, and the company of a cherished group of friends. Family vacations to Florida and the annual summer trip to Winnipeg Beach were highlights. Marcy only saw the good qualities in people and never had a bad word to say about anybody. After her children were born, she was a natural at recognizing their individual needs and was always supportive of them as they pursued their individual goals and paths. She always had their best interests at heart, and strived to instill in them the many positive human qualities that she possessed. Invariably, her friends would call on Marcy's expertise to help solve their day to day problems with their own children. In her later years, Marcy suffered from severe mental illness. However, even during her worst periods of anxiety and depression, she found ways to express her love for her family and it was clear that she cared first and foremost about their well-being. She will be forever missed.