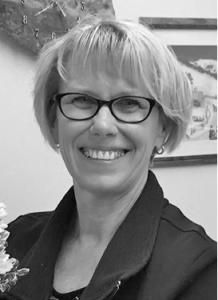 SMITH: Mary Smith, of Oak Lake, MB, passed away surrounded by family on May 4, 2021, at the age of 60. Mary Ann Lewin was born on May 31, 1960, to Cyril and Elva Lewin in Gimli, MB. After living throughout eastern Canada, the family returned to Manitoba and settled in Oak Lake when Mary was 13. There she met the love of her life, Kerry Smith, whom she married on September 5, 1981. Mary and Kerry built a loving home in Oak Lake, where they welcomed their three children, Shane, Torrie, and Carly. Mary was an incredibly devoted mother, shuffling her children to their various extra-curricular activities throughout their younger years and staying up waiting at the living room window for them to arrive home safely throughout their teens. She took pride in their schooling, accommodating her procrastinating children by working with them late into the evening on their homework, in particular serving as editor of countless reports. Always available with a comforting word, silent support, or a caring hug, Mary taught them the importance of commitment, perseverance, and family, and took great pride in their accomplishments. Mary was also driven in her career, which started in Brandon at Murray Printing. She eventually worked her way back to Oak Lake through a few administrative roles before finding her passion in the public service sector as an administrator for the RM of Sifton. Beginning as an administrative assistant in 1991, Mary earned her certificate in Manitoba Municipal Accounting through evening coursework with the support of her husband and amidst the chaos of raising three young children. This enabled her to successfully obtain the position of Chief Administrative Officer for both the Town of Oak Lake and RM of Sifton (later overseeing their amalgamation), a position which she held from 1995 until her retirement in 2018. Over her 23 years as CAO, Mary developed an extensive network of colleagues and friends across Manitoba and gained a reputation as a reliable resource for her peers. Outside of work and family life, Mary's hobbies included gardening, ceramics, baking, sewing, and volunteering in the community. A testament to her persistence and hard work, she took great pride in transforming her sand pit of a yard into her own private garden oasis. Her ceramic cupcake cookie jar was a beacon for kids returning home from school and the seasonal appearance of her hand painted decorations was a fixture of the Christmas holidays. Among the cookies, brownies, and cupcakes (the latter rarely iced in an effort to slow down their consumption by her bottomless pit children), Mary was skilled in making pastries, always ensuring an adequate stock of pie shells were present in her children's freezers. Her children and grandchildren were also the beneficiaries of her sewing; clothes and Halloween costumes were recurring projects when her kids were young, while table runners and bath towels were gifted to family when she returned to sewing in retirement. Mary was ever-present as a volunteer, which was most demonstrated by her time with the United Church Ladies Activity Group. In addition to contributing directly to the numerous fowl suppers and Santa brunches, Mary helped to organize these events by spending many long nights on the phone contacting members of the community. As devoted a grandma as she was a mother, Mary loved spending time with her grandchildren. Mary's retirement in 2018 was driven in part by a desire to visit more often with her growing family spread across western Canada. Her retirement years were built around frequent and extended trips to Calgary and Vancouver, as well as traveling to Ottawa, Newfoundland, and Spain. Unfortunately, prolonged health issues led to an ALS diagnosis in February 2020. Still, Mary persevered, always looking on the bright side of life and being an inspiration to those around her. Fighting through her illness, she welcomed a fifth grandchild in early summer of 2020, a sixth in the fall of 2020 and a seventh in early 2021. Her strength was incomparable and continued up to the end of her battle with ALS. Mary was predeceased by her twin sister Marie, her father-in-law Lyman, and her mother Elva. She is survived by her loving husband of 39 years Kerry, her children (and their partners) Shane (Cyndie), Torrie (Maggie), and Carly (Jordan), and her grandchildren Zachary, Clara, Nathan, and Logan (Shane), Malcolm (Torrie), and Winston and Stevie (Carly). She is also survived by her father Cyril, her mother-in-law Jean, her sister Connie (Michael), and an extended network of family and friends. Donations in Mary's memory can be made to the ALS Society of Manitoba, https://alsmb.ca/donate/memorialtribute/. Due to COVID, there will be no funeral service at this time.