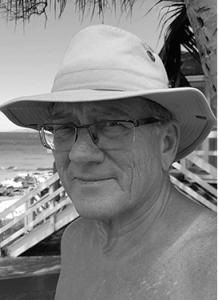 SOKOLOWSKI: Leonard Sokolowski passed away on Thursday, May 13, 2021 surrounded by his loved ones. He was born to Audrey and John Sokolowski in Brandon, Manitoba on October 18, 1951. Len married Diane (nee O'Callaghan) and had two daughters: Tanya and Monica. Len was a jack of all trades and master tinkerer. After a long career at Canexus, he thoroughly enjoyed his retirement. He discovered scuba diving later in life and spent his last years travelling to tropical destinations so that he could pursue his passion for deep sea diving. Len had fond memories of his youth with his friends and siblings, playing down in the willows and learning to play guitar. As a young man he spent many summer weekends camping with his family. He loved to relax on the beach, cook and keep a watchful eye on the birds in the backyard. Len was a man of few words and was fastidious about his routines. He was meticulously tidy and a minimalist that enjoyed life's simple pleasures. Len liked to portray himself as stoic, but his favorite days were spent with his grandkids by the pool. Len will be lovingly remembered by his wife Diane; his daughters, their husbands and his grandchildren: Tanya and Trevor McGill, Millicent, Henry and John; Monica Sokolowski and Milan Madhavji. Leonard is also survived by his brothers and sisters and their families. The family will cherish Leonard's memory privately. In lieu of flowers, donations in memory of Len may be made to the Ronald McDonald House, 566 Bannantyne Ave. Winnipeg, MB R3A 0G7, www.rmhccanada.ca/donate.