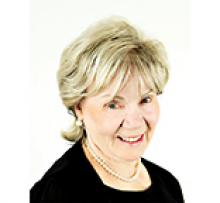 It is with profound sadness that we announce that Jean Beaudin suddenly passed away on April 14, 2021, shortly after admission to hospital.
Jean was born in Brandon, Manitoba on September 21, 1934, the third child of Fred and Katherine Dechka. She spent her childhood and teenage years in Brandon and graduated from St. Michael's Academy in 1954 trained as a Secretary with a typing speed of 120 words a minute error free on 1950s mechanical typewriters. Upon graduating, she was promptly hired by Wawanesa Insurance Company in Manitoba, and worked in the Policy Department. In 1956 Wawanesa transferred her to their Vancouver, British Columbia office. She fell in love with Vancouver and upon leaving her job, dreamed to return someday. On the way back to Manitoba in the summer of 1959, along with her sister, she worked at the Banff Springs Hotel. That summer was a memorable one as she often talked of the comradery of the staff and meeting a number of Hollywood Celebrities. Every future stop at the hotel she would make it a point to tell the current staff that she had worked there, compare notes of the past versus the present and reminisce about the Hollywood Celebrities she had met. In 1960 she accepted a job as a Legal Secretary with Walsh Mckay, a Winnipeg, Manitoba law firm. It was there that she met her future husband a few years later, Earnest Charles Beaudin. In September, 1963, Earnest joined the law firm of Walsh Mckay as an Articled Law Student. By November they were a couple and a three year secret office romance followed. Earnest left Walsh Mckay in September 1966 at the end of his articling period. Soon after on October 8, 1966, Earnest and Jean were married. Jean remained as a Legal Secretary through August 1969. The couple moved to Vancouver soon after and it became their permanent home.
In 1970 they were blessed with the arrival of their son, Earnest Shaun Beaudin and in 1971 their daughter, Catherine Mary Beaudin. Jean remained at home looking after the children. In 1981 she commenced employment with Decker Management Ltd. as Director of Operations overseeing the daily operation of the company's four private hospitals located in Vancouver and Victoria, until her retirement in 1994. Following her retirement, Earnest and Jean became "Snowbirds" by purchasing a winter home in a retirement community, Sun City Summerland, Las Vegas, Nevada. She loved the glitz, lights, sounds, Vegas Shows and playing the odd slot machine in the casinos.
In 2002 her one and only grandchild arrived, Iysus Mary B. Da Silva, the love of her life. She loved shopping and spending time with her granddaughter and was very involved with her music studies and general education from Kindergarten to Grade 12 Graduation from Brentwood College, Mill Bay, BC.
Jean loved to travel. During the children's elementary and high school years she spent many happy holidays with the family in Hawaii and Palm Springs at Christmas and spring break. Also Jean and Earnest travelled extensively over the years touring in Australia, New Zealand, Europe, Asia, South America, Middle East, Africa, USA and Canada. Her most memorable tours included multiple African Safaris and exploring the Amazon.
Jean lived a full wholesome life and is survived by her husband Earnest Charles Beaudin in Vancouver, BC, her son Earnest Shaun Beaudin, her daughter and son-in-law Catherine Mary Beaudin and Stephane Michel Breton, her brother Walter Dechka, her sister Irene Moerike, her brother and sister-in-law Lord and Joan Beaudin, her brother-in-law Dennis Beaudin, numerous nephews and nieces and last but not least her one and only grandchild, Iysus Mary B. Da Silva who was the love of her life.
The family would like to thank and acknowledge the compassion and dedication shown by the Support Staff, the Nurses, the Doctors and the Social Workers at the Vancouver General Hospital and the Coastal Health Authority.
Given the current pandemic restrictions a private cremation has taken place and a celebration of her life will be held for family and close friends at a future date.