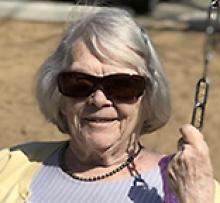 Cynthia (Gibb) Jordan passed away on May 3, 2021, in the Brandon General Hospital following a brief illness. Cynthia was born in Winnipeg on February 14, 1932. Shortly after she moved to Portage la Prairie where she spent the rest of her life.
She was predeceased by her mother Margaret Gibb and her father James Gibb. She leaves her family of daughter Margaret Jane "Peggy" (Ken) Wojnarski, son Douglas James (Marjorie) Jordan and son Gregory Lorne (Sandy) Jordan, along with her beloved husband Lorne Jordan. Also, she leaves eight grandchildren, Jordan, Sean, Aaron, Lindsey, Kyra, Cathy, Shelley and Kevin. Great-grandchildren include Kendall, Emmy, Haddie, Halo, C.J., Ava, Carson, Graysen, Scarlette, Grady and Brooke.
Cynthia grew up in Portage. She received her education at Victoria School and Portage Collegiate Institute. It should be noted that she was a remarkable student mostly finishing in the top three of her classes. She resisted going to university and elected to learn the business of banking. While all this was going on she became attracted to a farm boy from Oakland who had red hair and a love for farming. Surprisingly she too thought farming looked pretty good. So started a relationship that lasted from age 15 until her passing. So she and this farm boy were married in 1952 and a family of three followed, along with a farm and a mortgage. After raising three great children and helping out with farm decisions she wondered about going back to banking part time. Even without computer knowledge she continued very successfully for 12 years. Cynthia loved meeting people working at the bank. Customers said they liked doing business with her because she was, as they put it "old school and nice". Her relationships with fellow workers continued until the time of her passing. Eventually the farming business could use her bookkeeping skills. Also with her positive attitude she aided the farm in major decisions. This carried on until she and Lorne retired. Santy (as she was affectionately known) from early on was an excellent seamstress. Many clothes were made by her. Santy also cherished her yard and flower beds. Many hours went into her yard both at the farm and in her retirement at her home in Portage.
Sometime after mid-life Cynthia sought out her original birth family as she had been adopted at birth. Two sisters were located: Ann and Sheila and a brother-in-law Ed. This search resulted in many happy moments for unanswered questions. She leaves behind her sister Ann and brother-in-law Ed.
After many winter holidays Cynthia and Lorne entertained retiring in Brandon in a retirement complex. However after a short stay this was stopped by her sudden passing. "Rest in peace my dear friend" L.
Private family services will be at Trinity United Church led by Rev. Julie Baker, with interment taking place at Hillside Cemetery at a later date.
As expressions of sympathy, donations may be made in Cynthia's memory to the Heart & Stroke Foundation of Manitoba, 1379 Kenaston Boulevard, Winnipeg, MB R3P 2T5 or charity of one's choice.