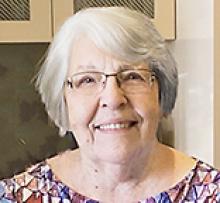 Maria was born on January 24, 1937 in Maloneck (Pelly, SK) to Peter and Anastasia Plaksuik, wife to Metro, a sister to Nick Plaksuik, a mother to Pamela Anderson (Ken) of Red Lake, ON and Keon Filewich (Arlyn) of Winnipeg, a grandmother to Casey Anderson (Gianna), Haley Kocis (Garrett), and Keylyn, Kyler and McKenna Filewich. She was also the great-grandmother to two infant grandsons, Maverick Kocis and Brooks Anderson.
Maria's employment commenced with Saskatchewan Government Telephones and then as a permit teacher at Timber School, north of Roblin, MB. This is where she met and married Metro Filewich, and in 1960 they moved to Dryden, Ontario. While in Dryden, Maria was employed eight years with the Ontario Provincial Police and 26 years with the Ministry of Northern Development. After retirement, Maria and Metro spent their summers in Winnipeg and winters in St. Petersburg, Florida.
A small family service was held on Friday, May 14. A memorial service and celebration of her life will be held later.
In lieu of flowers, donations can be made to her church, the All Saints Ukrainian Orthodox Church, 1500 Day St., Winnipeg, MB R2C 1E4 or to Diabetes Canada at www.crm2.diabetes.ca