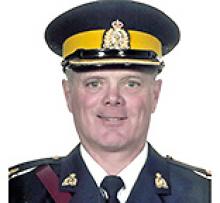 Mark passed away May 6 at the age of 67.
He is survived by his wife of 43 years, Karen, children, Jill Stobart (Mike), Scott (Christine), grandchildren, Iris, Elliot Stobart, Theo LeMaistre.
Mark was born in Winnipeg to John and Suzanne LeMaistre September 4, 1953. Siblings are: Arthur (Maddie), Jim (Maureen), Dave (deceased) (Liz), Anne Kapitan (Tim), Mary Schluter (Siert) and Susan LeMaistre. His brother-in-law is Malcolm Timlick (Heather), and there are numerous nieces and nephews.
Mark spent 36 years with the RCMP in 10 communities across Saskatchewan and Manitoba, proudly rising to the rank of Inspector. In 1987 Mark received a Commendation for saving a life while he was off duty. He had leadership roles in both the Saskatchewan Tactical Troop and the Manitoba Emergency Response Team. Mark worked important security roles during visits from Royalty (The Queen, Prince Edward), G8 Conferences, Summit of the Americas, and the Vancouver Olympics. He was respected by many for his integrity, loyalty, and friendship. He retired in 2014.
Mark was proud of his family, was loyal to his friends, and was always involved in his communities. He was generous in sharing his skills as a woodworker and repairman. He served as a board member with The Laurel Centre and the Island Lakes Community Association. He loved to curl and to hunt but his passion was fishing, spending many hours outdoors in his boat. He also enjoyed spending winters in St. Pete Beach, Fl.
The family would like to thank Health Sciences Centre CAU, GB2 staff for their wonderful care and compassion during Mark's end of life care.
In lieu of flowers, donations can be made to the Heart and Stroke Foundation or The Laurel Centre.
According to his wishes, cremation has taken place and a private family memorial service will be held.