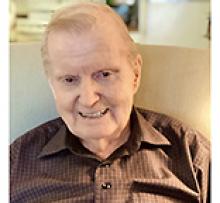 With heavy hearts we announce the passing of J. Kenneth (Ken) Beatty in his 91st year, on May 4. He will be remembered as a loving husband, father, granddad and great-granddad.
Ken is survived by his wife Joyce, his children and their spouses: Sheila Beatty (Darrell Burt), Jim Beatty (Hope) and Karen Grogan (Terry). He leaves his grandchildren, who held a special place in his heart: Matthew Beatty (Allison), John Grogan (Julie Gervais), Alec Beatty (Megan Friesen), Andrew Burt and Heather Burt. He also leaves his great-grandchildren, who brought so much joy in his later years: Patrick and Abigail Beatty, Luke and Max Grogan. He is survived by his sister Margaret Blain, brother Brian Beatty, his sister-in-law Frances Beatty, along with many nieces and nephews and their families, all of whom were dear to him. Ken was predeceased by his sister Joan and his brother Hyland.
Ken was born in Winnipeg to James and Edythe Beatty and raised in River Heights. He graduated from law school in 1954 and spent the next two years working in Virden, MB. Returning to Winnipeg in late 1956 he met Joyce McCallum, an R.N. working at the Winnipeg General Hospital. Ken and Joyce were married in 1958 and moved to sunny St. James in 1960, where he lived for the rest of his life. Following a time in private practice, he worked at the Business Development Bank, and then moved on to a successful career at the Manitoba Telephone System, becoming General Counsel and Secretary of the Board until 1988. Ken then, with Joyce's able assistance, returned to private practice and kept busy until final retirement in 1998.
The coda to his career came with his work with the Telephone Retirees Association of Manitoba to recover MTS pension funds taken from the employees/retirees when MTS was privatized in 1997. His single-minded devotion to fairness and equity helped drive the 17 year battle that ended with the Supreme Court of Canada ruling in favour of the employees and retirees in 2014.
In his youth Ken was active in sports, playing hockey, lacrosse and baseball. He enjoyed many years at YMCA Camp Stephens as a camper and counsellor. He passed on his love of the outdoors to his children and taught them the four C's of the Canadian Outdoors - Cottages, Camping, Canoeing and Cribbage. In his early 20s he took up curling - which turned into a lifelong passion as a curler and a fan. He was proud to represent Manitoba at the Canadian Senior Men's Championship with Bruce Hudson in 1981.
For many years Ken was actively involved with the Kinsman Club of Winnipeg, becoming President of the Winnipeg Club and later - District Governor. He served on the Board of Big Brothers/Big Sisters of Winnipeg.
Ken and Joyce made a home filled with laughter, music, and occasional spontaneous dancing. They had lots of fun with a wonderful circle of friends. Ken was outgoing and personable, he made everyone who came to know him feel important. It always amazed his kids that, whenever they went anywhere with him, not five minutes would pass before he met someone he knew.
During the past year his health deteriorated and the last six months were very difficult. He was able to remain in his home until the end due to Joyce's loving care. They would have celebrated their 63rd anniversary on May 10.
Cremation has taken place and a Celebration of Life will be held at a later date when friends and family are able to be together, to share memories of this good man, so dear to our hearts.
In lieu of flowers, please consider a donation to the CurlManitoba for Life Endowment Fund, through the Winnipeg Foundation at www.mycharitytools.com/agift/ wpgfdn.