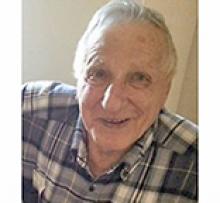 Albin Pitura was born July 3, 1932, in McMunn, Manitoba, to Michael and Mary (Boyko) Pitura.
He lived for the outdoors: enjoying fishing, picking wild mushrooms, splitting firewood, planting trees, chain-sawing Scotch pine, and especially working in the outdoors, so much so that Albin could not abide a city job - a one-day job in the city and that was it! He retired with 25 years of service with the Department of Mines and Natural Resources as a Fire Ranger, a job he enjoyed and excelled in.
Albin enjoyed all kinds of music and was ready to share his love of music with anyone. He liked phoning people to chat or express appreciation. He was also a voracious reader, especially the works of Pierre Berton, and Albin never turned down a good game of cribbage.
On August 21, 1965, Albin and Rita Godard were united in marriage, from which they had three children. Albin's biggest treasure was his six grandkids. He got so much joy out of spending time with them.
Albin leaves behind his wife Rita of almost 56 years of marriage; children, Randy (Julie) Pitura, Wayne (Nancy) Pitura and Donna (Fulton) Smyl; grandchildren, Emily and Jonathan Pitura, Amy, Matthew, and Amanda Pitura, and Adam Smyl; many nieces, nephews, cousins; and a stepbrother John Gawron.
Albin is predeceased by his father Michael, mother Mary; and two sisters, Elsie and Victoria.
A big heartfelt thank you to Suzanne and Julia, who provided healthcare for Dad while he was at home, and to Dr. Steve, and the nursing staff at St. Anne Hospital. They not only made Dad's last moments as comfortable and peaceful as possible, they also showed immense kindness and grace to our grieving Mom.
Cremation has already taken place and there will be no funeral services due to covid restrictions.