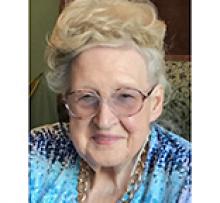 It is with profound sadness that we announce the passing of Doreen Lilian Parker at the age of 94. She passed away peacefully at the Poseidon Personal Care Home on May 9, 2021, shortly after a visit with family.
Forever to cherish her memory is her eldest son David (Jackie) Symonds; her sister Mary Edwards; grandchildren, Marcia (Jason), and Neil (Chantal); and her great- grandchildren, Julian, Amélie, and Zachary. She also leaves behind many loved nieces and nephews in England. Doreen was predeceased by her parents, Lilian and Reginald Turner; her brother Tony Turner; husbands, Derrick Symonds and then Eric Parker, and her son Peter Symonds.
Doreen was born in Coulsdon (Surrey) on March 20, 1927 and grew up in Westerham, England. She worked as a nurse towards the end of the Second World War and then as an Admissions Officer at the Norfolk, Norwich and Gordon General Hospitals. In 1983, Doreen and Eric moved from England to Canada and spent many years taking care of Marcia and Neil as youngsters.
Mum was gifted when it came to arts and crafts and she always had fun things planned to keep her grandchildren entertained. She kept a spectacular garden at her home on Regis Drive and spent many years as a Brown Owl leader in Brownies and Girl guides. From 2002 until 2017 Mum moved back to England as she found the Winnipeg winters difficult after Eric had passed. This gave her the opportunity to spend some happy years with her son Peter, until his sudden passing. I was blessed to have had my Mum back with us living in Canada over the last four years of her life.
Our family would like to thank Dr. Brian Sharkey and the staff of Poseidon for their help and excellent care of Mum.
Due to Covid restrictions a private family funeral will take place.

Rest peacefully sweet Mum (Nan).
We love you and believe you chose
to leave us on Mother's Day as it's
the day you blessed our lives.