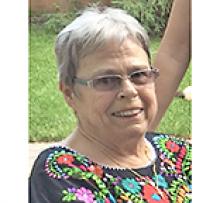 Penelope Yvette Marie Grift (nee Nault) passed away peacefully on Sunday, May 8, 2021, after a courageous battle with cancer.
Born on October 31, 1942, Penny is survived by her four children, Dave (Joy), Steve (Janice), Chris (Teresa) and Andrea (Keith), and eight grandchildren, Mitchell, Hannah, Katie, Jacob, Gracie, Parker, Sammy and Cooper. She is also survived by her brother Raymond (Dorraine) and sister Wanita (Paul), brothers-in-law, Tony, Archie (Maria) and Larry, sisters-in-law, Carol, Mary Ann (Mike), Joanne (Don), and numerous nieces and nephews. Penny was predeceased by her loving husband Bert in 2016. She was also predeceased by her sister Terry (Len), Aprille (Tony) and brother Denis (Carol), brothers-in-law, Ed Grift and Ed Demchuk, and sisters-in-law, Fran and Marlene.
Penny was raised in Fort Garry on traditional Metis land. She attended Sacre-Coeur and spoke fluent French. She worked at Great West Life for many years before finding her true passion as an Educational Assistant at Laura Secord where she was much loved by staff and students. She met Bert in the early 1960s and got married in 1964. They lived in Fort Garry, then Transcona, and on to River Heights where they settled down and raised their family.
Our home growing up was always a very loving, funny and busy place. Penny would tirelessly drive kids to hockey and soccer. She was a very proud hockey mom. She was also an enthusiastic community volunteer at Sir John Franklin Community Centre. She ran the canteen and was the soccer convener for many years in the 1980s. She made sure her kids became certified soccer refs so that there was always someone to do a game in a pinch. Penny and Bert spent a lot of time relaxing at Nan's house in Matlock. They loved the peaceful beauty of the lake and the quiet of getting away from the teenagers. Many large family gatherings were enjoyed by the lake.
Penny grew up as a proud Metis woman. She made sure her children knew about their heritage and to be proud of their history. The Nault family played an important role in the history of this region. Her great-great-grandfather Andre Nault stopped the Canadian survey team from marking out Metis land to give away to new settlers. Along with his cousin Louis Riel, they helped start the Red River Resistance of 1869-1870. These were stories we grew up hearing. One of her favourite adventures was travelling to Batoche, SK with her sister Terry and brothers, Raymond and Denis and their spouses to experience the history and bravery of the Metis people. Another one of her great-great-grandfathers, Damase Carriere, was killed at Batoche by the Canadian soldiers.
We would like to thank the caring and compassionate staff at Grace Hospice for their wonderful care of our mother during her last weeks.
There will be no service due to public health restrictions. We will hold a private family gathering when we are able to get together again.
Donations can be made in Penny's name to Grace Hospice, 260 Booth Ave., Winnipeg, MB R3J 3M7.