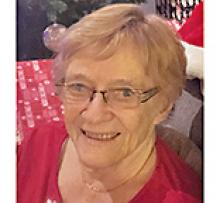 Frances Stewart-Steele (nee Joseph) left this world peacefully on April 29, 2021, after a courageous battle with cancer at the age of 91. She was a caring wife, mother, grandmother, sister, and a loving friend to all.
With summers spent at Victoria Beach, following high school at Norwood Collegiate she entered Nursing School at St. Boniface Hospital. Having found her passion, she pursued a lifetime career in the service of caring for others. Continuing to challenge herself her career covered Obstetrics, Urology, Pediatrics, Surgical, Maternity, Special Needs, Elder Care, and Mental Health disciplines with all benefiting from her knowledge, wisdom, and care. Despite her roles across the spectrum from Casual Nurse, Evening Supervisor, Head Nurse, Director, Instructor, and Mentor, she still found time to successfully raise five children and assist in the startup of her first husband's company.
Fran met Royal Stewart in St. Catharines, Ontario and subsequently moved back to Winnipeg, Manitoba following the birth of their first son. Three more sons and one daughter arrived in the following years. Over the next 34 years together, life centered around family, friends, travel, sporting activities, and wonderful summers at Lake of the Woods. Tragically, Royal passed away in 1987 at the age of 62 after a lengthy struggle with an ongoing heart condition.
During a subsequent High School Reunion in Winnipeg, she reconnected with her much- admired friend Bill Steele. They married in 1990 and began a wonderful partnership over the next 24 years that carried them to many parts of the globe, as well as spending many winters in Florida playing golf and tennis, Markham, and summers on the beach at Victoria Beach. Tragedy returned as Bill passed away in 2014 following a courageous, extended battle with cancer.
Fran was predeceased by her younger sister Evelyn with whom she was very close and is survived by her five children and 14 grandchildren. She will be sadly missed by all those who knew and shared in her long and admirable life, including a large extended family on the Steele side.
Special thanks to Balmoral Retirement Residences of Collingwood, Ontario for their kind and professional services during her final months.
A memorial service will take place later when circumstances permit.
If friends so desire, a contribution can be directed to the St. Boniface Hospital Foundation - https://stbhf.ca/en/donate/