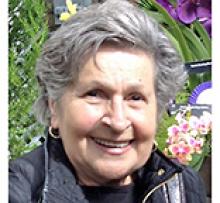 Sadly, Serafina Lydia Banathy passed away on May 11, 2021 in the loving arms of her daughter Lisa, at the St. Boniface Hospital in Winnipeg, after a valiant seven year battle with third stage ovarian cancer.
The family wishes to extend a heartfelt thanks to the doctors, nurses, and support staff throughout the years in CancerCare at Health Sciences Centre, and most recently in Palliative Care at St. Boniface.
Serafina (Sera) was born in San Giovanni in Fiore, Italy, on May 20, 1945, immigrating as a child with her family, arriving in Winnipeg, December 1953. Sera was predeceased by her parents, Giuseppe and Angelina Paletta.
Sera was so loved by family and friends. Left to forever cherish her memory are daughter Lisa (Joel) Karpyshin; and sons, Joey Banathy and Tony Paletta, who supported her in every way they could throughout her battle, and her granddaughters, Skyler and Kendall Karpyshin, and Isabella Paletta, who were bright lights in her life.
Hank Plouffe, her partner for the last 13 years, showed her how beautiful relationships should be. He was her rock throughout their time together.
She had a lifetime of love and support from her sisters, Roslyn (Candido) Jacobucci, Antonia Paletta (Pete Haylett), and Anna Paletta (Ali Hosein).
Sera also leaves to grieve her passing nieces, Gloria and Angela; nephews, Robert and David, as well as her loving Paletta cousins. Her many good friends include her coworkers and customers at the Assiniboine Hotel where Sera worked for over 40 years.
Her journey showed her much love and hardship but love prevailed. Her faith in the One Source, which she called God, carried her through good times as well as tough times.
Due to Covid the service will be postponed. A celebration of her life will take place when that is possible.
Flowers are gratefully declined. Donations, if desired, can be made in her name to the Salvation Army, or the charity of your choice.