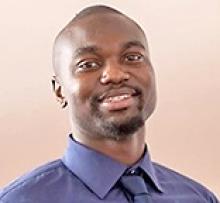 It is with great sadness that the family of Philip 'Phil' Oketayot Labongo announces his unexpected passing in the early hours of May 6, 2021, in Winnipeg, Manitoba.
Philip is survived by his mother Florence, three sisters, Lucy, Susan, Nora, and two brothers, Vincent and Jonathan, along with nieces and nephews.
Philip was born on May 25, 1992 in Uganda. In September of 1998, Philip moved with his parents and four siblings to Canada where sadly his father Victor Labongo passed away soon after their arrival. An energetic little boy, Philip found refuge in the Boys and Girls Club of Victor Mager School, which he described as a home away from home. There, he was introduced to many new hobbies and friends. Originally a soccer player, he ultimately found his passion in basketball, a sport that provided him new experiences and helped shape him as a young man.
He graduated from Dakota Collegiate in 2010, where he left his mark on Lancer's sports history, setting numerous records. Philip was a leader on the court and in school and everyone loved to be around him. In his senior year, he was named the AAAA Boys Manitoba Player of the Year by Basketball Manitoba. Philip was averaging nearly 30 points per game and went on to set a team scoring record of 66 points in a single game, leading his team to victory in the St. Vital Tournament. Apart from being an outstanding basketball player with an unmatched work-ethic, he was a terrific person who was humble, kind and loyal. He truly had a captivating and engaging personality.
After graduating, Philip attended the University of Calgary, where he studied business and played one year with the Dinos. He then returned to Manitoba to further his education at the University of Winnipeg.
Philip contributed to his community through volunteerism, and coaching youth basketball where he became a role model. He was always willing to lend a helping hand to anyone who needed it.
His wonderful sense of humour, friendly presence and compassion for the well-being of others will remain with those who were fortunate enough to have known him. With his ear-to-ear smile and big hugs, he made an impact on everyone he met.
He will be dearly missed by countless friends, those close to the family, and by relatives abroad, especially his maternal grandmother, Nora Akot.
Due to current circumstances of Covid-19, a private family Mass will be held at St. Timothy Parish. Friends and family wishing to join virtually the service may do so at www.st-timothy.ca on Tuesday, May 18, 2021 at 11:00 a.m.
Philip will be remembered as a hardworking and loving gentleman who was a loyal servant of God.
Should friends desire, contributions may be sent to the Philip Labongo Memorial Fund to assist the family with funeral expenses.